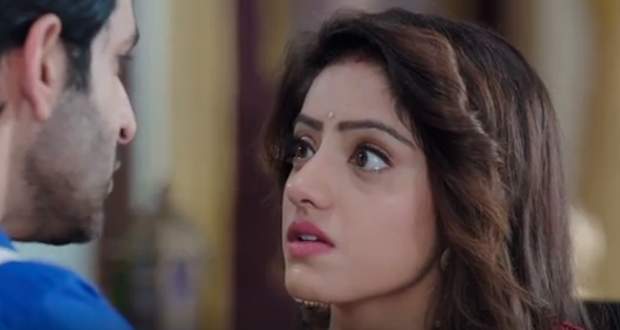 Kapil planning his next target.

Angad is questioned where he was upon reaching home. Angad says he was disturbed and states he should have gone office. Sandhya’s brother is suspicious of Angad lying about going to office.

Sandhya gets suspicious when she can’t find him in the room. A tune catches her attention and she wonders who is playing it. She follows the voice and thinks it’s Kapil but finds Angad instead.

Sandhya questions him about the tune and Angad claims he recently learned and is fond of playing mouth organ. She feels weird with Angad’s behaviour. He also denies with anger for lunch and tells her not to disturb him.

Angad comes in his bedroom and fights with Kapil in his body.

Meanwhile, at lunch table Sandhya is disturbed with Angad’s behaviour. She learns Angad doesn’t know how to play mouth organ or any other music instrument.

In the bedroom, Kapil comes out of Angad’s body. Angad claims he will tell Sandhya everything while Kapil tortures him. He tells Angad about his first night with Sandhya.

Manu, on the other hand, is searching for a file and gets scared when he sees a hand on the book shelf. He tells Bhairvi that it’s the same date 23rd June and Ashutosh has died by getting burnt.

Manu can feel a presence and says Ashutosh’s death is not an accident. Bhairvi tells him to not say anything to anyone. She also burns the file.

Meanwhile, Angad wants to tell Sandhya about everything but Kapil stops him. He also threatens to kill Sandhya. He also declares he will remain inside Angad for 21 hours. He will stay out from 3pm to 6pm.

Kapil reveals to Angad that Ashutosh is dead and he is the one behind all. Sandhya comes knocking on the door. Kapil warns him not to tell anything to anyone or he will kill Sandhya.

Angad hugs Sandhya with affection and Sandhya also feels the same affection for him. Angad tries to tell Sandhya the truth but stops himself when he sees the spirit.

They both enjoy lunch together. They feel their first moments of love after marriage without Kapil getting in the way. Angad tries to tell her indirectly to not bear any misbehaviour from him.

Akhil is still suspicious of Angad and tries to find the CCTV footage of Angad. He instead finds the evil spirit on the screen.

When Angad realises the evil spirit is gone and tells Sandhya everything. The evil spirit of Kapil’s wife comes and starts hitting Sandhya. Angad begs the spirit to let her go. Sandhya falls on floor and gets unconscious.

© Copyright tellybest.com, 2018 & 2019. All Rights Reserved. Unauthorized use and/or duplication of this material without written permission from tellybest.com is strictly prohibited.
Cached Saved on: Friday 17th of January 2020 11:24:21 PMCached Disp on: Wednesday 22nd of January 2020 07:03:52 AM