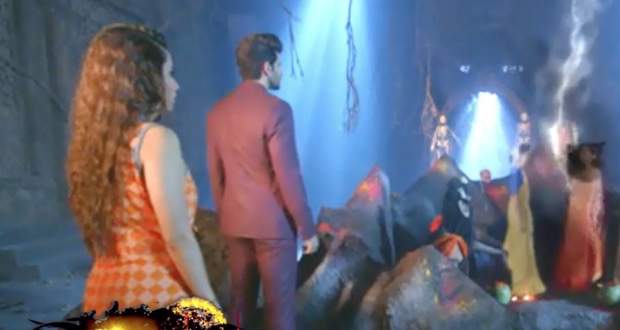 Today's Kawach 2 1 Sep episode starts with Malini saying Sandhya should give Prem to Bhau. Angad says they will find a way to stop Bhau and Sandhya says the priests are about to reach.

Priests are not able to enter Jindal house as Shakini comes to stop them. Sandhya finds priests in the form of dolls on their doorstep.

Angad decides to go to Shakini to save his family members. Shakini comes on Angad’s demand. Angad gets scared to see her horrible looking face.

Angad shows sympathy to Shakini’s state and tries to stop her. Shakini tells him to hug her and turns into a beautiful girl.

She says Bhau will send someone else for Sandhya. Shakini’s soul gets released and the dolls turn into humans again.

Sandhya says now everything will be alright but Angad warns Bhau will continue to send someone until Sandhya gives Prem.

Malini is upset hearing this and decides to throw Prem out of her house. Later, she says she will leave the house if Prem stays.

She comes in her room and hears some voice from her bed along with some movements. She sees something and shouts.

They all find her unconscious in the room and all green. Meanwhile, Rekha feels someone’s presence and draws handprints of a kid.

The same handprint they find on a wall. Rekha touches the handprint and sees blood coming out of her eyes. She further sees some green footprints and follows them.

She reaches her room and gets trapped. She sees a green coloured small person on the roof. She also turns green and a small person is shown laughing.

© Copyright tellybest.com, 2020, 2021. All Rights Reserved. Unauthorized use and/or duplication of any material from tellybest.com without written permission is strictly prohibited.
Cached Saved on: Monday 29th of November 2021 07:35:42 PMCached Disp on: Wednesday 1st of December 2021 02:25:19 PM