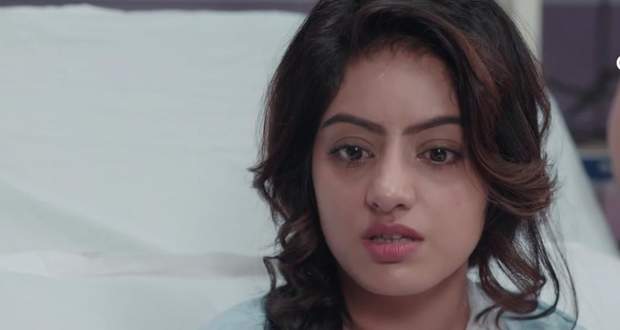 Sandhya’s family arriving at the party. Sandhya’s mother gets worried to see Angad but is assured by Sandhya that he is safe.

Akhil visits Manu to show him the video clip. They both arrive at the party.

Aaji also comes and gives a book to Sandhya and tells her only she can read that book. At the same time, Rishi arrives at the party with a gun in his hand.

He threatens to kill Angad. Kapil controls his actions and Sandhya gets shot in the process. Rishi gets scared and runs away.

They all rush to the hospital leaving the holy book behind. Akhil blames Manu for releasing Rishi and her sister in a critical condition.

Angad blames himself for Sandhya’s condition and prays to God to help him. Meanwhile, the doctor gets the Rudraksha Mala removed from Sandhya’s neck.

Kapil arrives to meet Angad and tells him the doctor has removed the necklace from Sandhya’s neck. He tells him to remove his own necklace to save his wife.

Angad denies removing the Rudraksha necklace. He says he can kill Sandhya but he will also kill himself and then all his missions will fail.

In the morning, Sandhya gets conscious and Aaji again gives the book to her. She finds the pages empty and prays Lord Shiva to find a way for reading book.

Manoj is preparing to leave but is interrupted by Kapil and Kashthi who try to kill him by burning him alive.

© Copyright tellybest.com, 2018 & 2019. All Rights Reserved. Unauthorized use and/or duplication of this material without written permission from tellybest.com is strictly prohibited.
Cached Saved on: Thursday 30th of January 2020 08:07:13 PMCached Disp on: Tuesday 18th of February 2020 11:29:22 AM