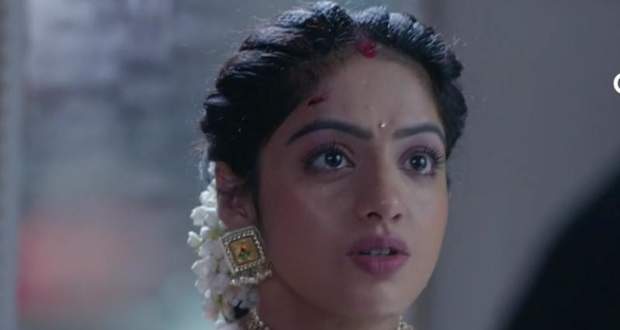 Today's Kawach 2 21 Sep episode starts with Rekha drawing the future in the hospital. She draws a circle and decides to save the Jindal family from the Pishaach.

At the same time, a crow comes in from the window and attacks her leaving her unconscious. Later, Rekha reaches home to find Angad is dead.

It turns out to be Rekha’s imagination and she decides to stop it. Meanwhile, Aastha returns home with Shobha and Ankit in Jindal house.

At the same time, Angad gets conscious and turns into a Pishaach again. The crows surround the sun and it gets dark which according to Usha is a bad sign.

The ladies start making Shivlings with mud while Sandhya starts searching for Angad. Later, Angad first attacks Balraj and then brings him in Malini’s room.

Sandhya gets suspicious of someone else being possessed and finds blood prints. Sandhya finds out Angad is the real Pishaach and gets shocked.

Sandhya wants Angad to fight the Pishaach in his body while he asks for Prem and attacks her. At the same time, Kartik comes with a gun but is attacked by the Pishaach.

Sandhya points a gun at Pishaach and he takes the form of Angad. Prem has powers and saves Kartik from the gunshots of Pishaach.

Prem uses his powers to attack Pishaach. Aastha has seen Prem using his powers. Prem tells he is not aware of his powers and how to use them.

Prem tries to use his powers but fails. Later, when Aastha is about to fall, Prem saves her by using his powers.

Kartik meets Rekha and enquires about the future. Rekha sees that she is being killed by Bhau. Rekha further sees that Prem saved her from Bhau.

© Copyright tellybest.com, 2020, 2021. All Rights Reserved. Unauthorized use and/or duplication of any material from tellybest.com without written permission is strictly prohibited.
Cached Saved on: Monday 29th of November 2021 07:35:30 PMCached Disp on: Wednesday 1st of December 2021 03:35:33 PM