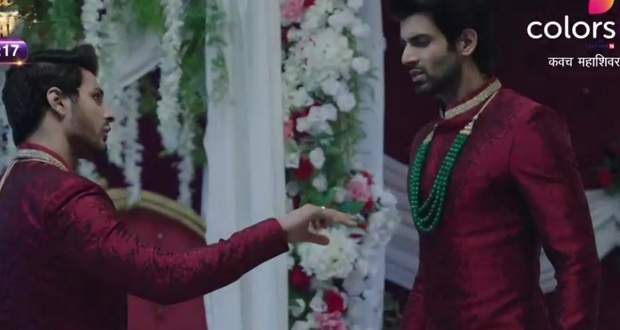 Nisha puts haldi on both Sandhya and Angad’s face.

Everybody starts dancing on different songs.

Angad and Sandhya also dance on a romantic song.

Nisha is angry and remember her good times with Angad.

She remembers how she betrayed Angad.

Suman and others starts teasing Angad over video call.

Angad finds Nisha in his bedroom.

Nisha starts flirting with Angad but he pushes her away and tells her he will never come back in her life.

Nisha gets angry and leaves in her car.

Meanwhile, the rituals of Sandhya and Angad’s marriage start.

Nisha goes to that lake and starts hitting the baba with a stick.

Sandhya and Angad are still following the rituals of marriage.

Nisha tries to take out the trishul but fells down instead.

She again tries to get the trishul out and frees all the bad spirits including Kapil.

Before, Angad can tie Mangalsutra to Nisha’s neck, the lights going off and lot of wind in the air.

Some Sadhu enter the setting and Angad says they will recite Mantra for protection.

The light comes back and rituals start again.

Usha calls panditji but pandtji lies that spirits are still locked and everything will be all right.

Their marriage gets completed with Angad putting sindoor on Sandhya’s forehead.

Everybody tease Angad and Sandhya after marriage.

Angad enters the room and starts finding Sandhya but finds a letter instead.

Suddenly the lights go off and the letter starts burning.

Angad sees Kapil standing in front of him.

Angad gets shocked to see him and ask how he got away from the box.

Kapil tells Angad he wanted him to marry Sandhya.

© Copyright tellybest.com, 2018 & 2019. All Rights Reserved. Unauthorized use and/or duplication of this material without written permission from tellybest.com is strictly prohibited.
Cached Saved on: Thursday 30th of January 2020 08:06:09 PMCached Disp on: Sunday 23rd of February 2020 09:27:24 PM