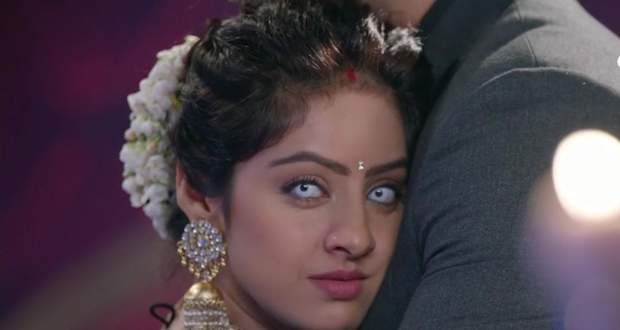 Today's Kawach 2 24 Aug episode starts with Saakshi asking why she is called there in Rekha’s body. She attacks Angad and later traps Sandhya in a death grip.

Angad instructs to break the stone to send Saakshi back.

Saakshi returns in the cave and finds out that Prem and Aastha are missing. Meanwhile, Prem takes Aastha to a temple where Saakshi can’t reach.

Rekha draws the Devlaali temple and tells kids are there. At the same time, Saakshi uses Sandhya and Angad’s voice to manipulate Aastha in coming out.

Saakshi traps Aastha in a whirlwind and Angad and Sandhya also reach to save their kids. Prem comes and tells Saakshi to leave Aastha.

He further tells Saakshi to leave as she is bad and hits everyone. Saakshi blames Sandhya and tries to kill her. Some priests come and save Sandhya.

Rekha gets weird vibes from Sandhya and gets suspicious.

Later, Sandhya gets uncomfortable with getting close to Angad when he tries to get romantic.

Meanwhile, Rekha tries to draw but everything is black in her drawing. Later, Panditji reveals that they helped Saakshi in staying in Sandhya’s body while Sandhya will roam as a soul.

Saakshi in Sandhya’s body declares she will steal her whole life. Prem gets suspicious of Sandhya while later Saakshi reveals her true self to Prem.

Rekha feels someone’s presence while Sandhya’s soul wanders in the house but nobody can see her.

Sandhya prays in the temple and Saakshi comes to mock her. Sandhya asks Lord Shiva to send someone and at the same time, Rekha comes in the temple after hearing crying voices.

Upcoming Kavach season 2 episode update: Sandhya tells Saakshi that she knows the reason for her death.