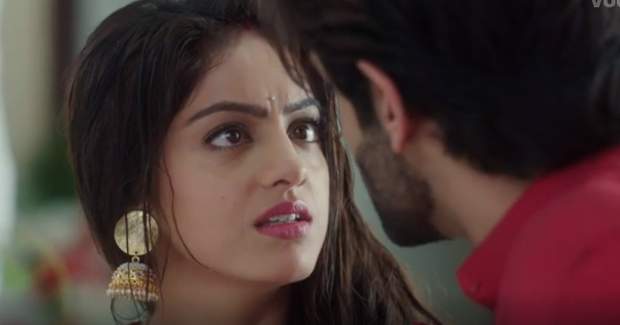 Today's Kawach 2 24 Jun episode starts with Kapil aka Angad being determined to spend his first night with Sandhya.

He gets close to Sandhya and touches her stomach.

He has some mission to complete with his evil powers.

After a while, Sandhya’s cousins and friends again come to disturb the couple.

Angad acts weird and closes the door in anger.

Sandhya finds it strange and questions him for his behaviour.

Kapil behaves normally with Sandhya and handles the situation.

Kapil tells the evil spirit that arrives on the window to stay back.

Kapil aka Angad switches off the light and gets intimate with Sandhya.

Kapil again touches Sandhya’s stomach for his evil intentions but is again disturbed with a knock on the door.

Kapil gets angry with them but gets rid of them somehow.

Everyone gets worried with Angad’s behaviour.

Angad (Kapil) tells Sandhya that nobody can separate them now.

After Sandhya falls asleep, Kapil again starts chanting some mantras in order to fulfil his intentions.

In the morning, Nimmo gets worried to see all flowers scattered on the floor and all gods crying.

When Angad aka Kapil sees his real face in mirror, he gets tensed.

Sandhya ignores it but Kapil gets angry and says they should have a baby soon.

Sandhya finds his behaviour very weird but Kapil handles the situation by sweet talking with her.

Nisha enters the room and gets upset to see Angad and Sandhya together.

Nisha waits for some sign of Kapil as he released him last night.

Kapil thanks her for releasing him.

Meanwhile, Angad’s Uncle and Aunty start discussing about the incidents in the temple.

Sandhya enters the kitchen and her mother in law asks her to make something.

She admits she doesn’t know cooking.

Her mother-in-law tells her not to worry but Kiran doesn’t like the whole scene.

Later, Angad’s uncle sees Kapil’s face in the mirror of an antique box and gets scared.

Angad’s Uncle asks him if there was someone else but gets distracted with Sandhya’s brother coming to take her for pag phera rasam.

Rishi and Ashu’s fight distracts everyone.

The servants get worried to see insects in noodles made by Sandhya.

Nimmo believes there is some evil spirit in the house.

Malini tells Nimmo to get rid of noodles.

Angad aka Kapil acts weird in car and Sandhya asks him if he is Angad only.

Upcoming Kavach season 2 episode update: Angad speaks in Marathi and Sandhya asks him when he learnt the language.