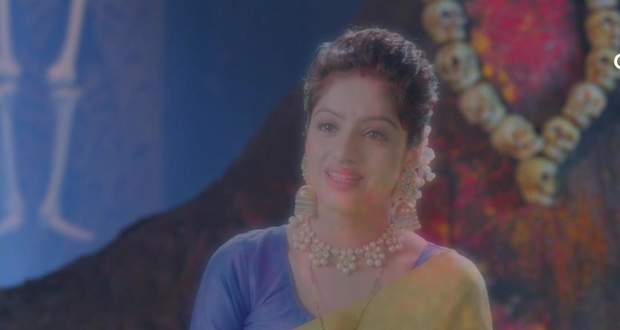 Today's Kawach 2 25 Aug episode starts with Rekha coming near the temple to see where the voice came from. Rekha gets scared to hear a voice calling her name.

Sandhya tells her everything about Saakshi stealing her body. She requests Rekha to help him get her family back.

Saakshi scolds Aastha and tells her to stay away from Prem. Angad gets mad at her and says she, not the same old Sandhya.

Saakshi warns Sandhya that she will do something before the end of the day. Meanwhile, Prem tries to warn Angad about Saakshi and Rekha also tells him the truth.

Angad can feel Sandhya’s tears while Sandhya wishes to talk to Angad. Rekha invites Sandhya in her body.

Jolly tells her the truth while her soul is called in a cave by Tantrics. Sandhya reveals that Jolly was the one who called Saakshi as Sandhya.

He used some girl to call Saakshi and her family at an address where he can kill them. Sandhya says she will sacrifice her life for her sister.

Saakshi feels guilty for misunderstanding Sandhya and decides to leave Sandhya’s body. Saakshi leaves by saying that Bhau will come for Prem.

Later, a crow comes in Prem’s window and later Prem tells Sandhya that Bhau used to come at his house and Saakshi used to be scared of him.

Rekha decides to call Bhau but gets a fit instead. She reaches in a whole other place surrounded by snakes where she hears the voice of various people asking for help.

Rekha comes back and says Bhau is very dangerous.

© Copyright tellybest.com, 2018 & 2019. All Rights Reserved. Unauthorized use and/or duplication of this material without written permission from tellybest.com is strictly prohibited.
Cached Saved on: Saturday 6th of June 2020 08:44:32 PMCached Disp on: Saturday 4th of July 2020 05:02:49 PM