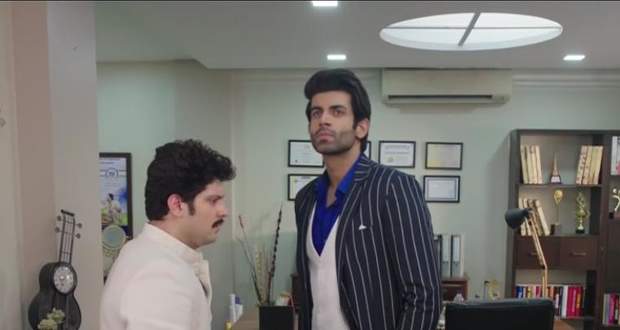 Ashutosh is wondering about Angad when the temperature of the AC falls to -6 degrees and keeps on falling.

Meanwhile, in the car, Sandhya finds Kapil’s behaviour weird. He gets scared to see a snake. Sandhya asks the guy with the snake to leave on Angad’s (Kapil) plea.

Ashutosh is still trapped in a frozen zone. The whole place starts to crumble down. At the same time, an evil spirit comes and enters him.

The evil spirit in Ashutosh calls Rishi and tells him to come to his office. He even promises to make him meet Shobha.

Sandhya meets everyone at her home. Everyone praises Angad. Sandhya is shocked to learn Angad knows Marathi. He covers up by saying he learnt it just for her.

Kapil (Angad) comes in the office and scares Ashutosh some more.  Ashutosh is terrified to see Kapil in mirror. Kapil reminds him about himself and their past. The evil spirit increases the AC temperature to kill Ashutosh off heat.

Ashutosh reminds him again of the night that burnt him down while Ashutosh keeps on pleading for his life. Kapil sets Ashutosh on fire and at the same time Rishi gets shocked to see him burning.

Meanwhile, Sandhya assures her mother that she is very happy at her new home. Sandhya is worried with Angad’s behaviour and tells her parents about it.

At home, everybody is suspicious about Rishi being behind Ashutosh’s incident. Kiran blames Sandhya for everything.

Ashutosh is critical but tries to tell about Kapil. Police is also suspicious of Rishi attempting on killing Ashutosh. Angad starts hitting Rishi.

The evil spirit comes in Angad’s room and kills Ashutosh. Kapil continues his drama of caring for Ashutosh and stalls everyone. Kapil (Angad) is successful in his plans as Ashutosh dies of heart attack and police arrests Rishi.

Roohi is not ready to believe Rishi could kill anyone while everyone is wondering about Angad.

Kapil takes Angad’s body to a secluded place and gets out of it. He declares everyone will die and remembers how his family was killed in a fire. He blames Patwardhan and Jindal family for the whole incident.

He also declares he and his wife will control Sandhya and his life. Also, he says he will make Sandhya pregnant with his child.

Upcoming Kavach season 2 episode update: Kapil to kill his next target of his six targets.