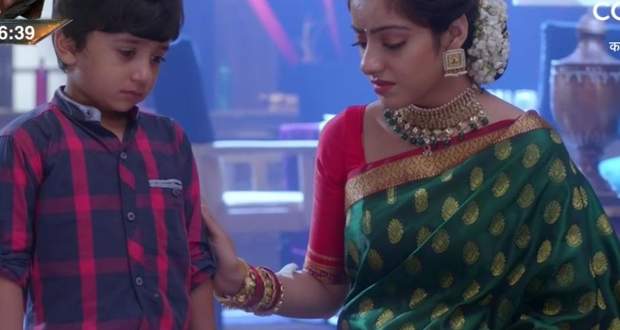 Today's Kawach 2 29 Sep episode starts with Pishaach in Angad thinking who is more powerful than him in the house. He finds out he is locked in the room.

Sandhya further tries to manipulate the Pishaach to get him out of Angad’s body. Pishaach tells his back story and reveals he was ugly and nobody wanted to marry him.

Pishaach asks if she will come closer to save Angad while Sandhya creates a plot to trap the Pishaach. The Pishaach comes out of Angad’s body and Sandhya again manipulates him.

Sandhya uses the Shvlings to get rid of the Pishaach but Pishaach says he will take Angad along. Angad stops breathing and later Rekha returns to find him dead.

Aastha reveals that Prem has powers and he saved Kartik. Rekha says they can use Prem’s powers to bring Angad back.

Prem tries, again and again, to bring his father back but fails. He again uses his powers and everyone gets unconscious. Aastha says they will be back along with Angad. The doctor declares them dead and Balraj asks for birth certificates.

Meanwhile, Sandhya, Kartik, Rekha, and Prem are at the Divya world. They start searching for Angad and wish their last rituals are not performed in the meantime.

Upcoming Kavach season 2 episode update: Sandhya finds Angad while they are told only four souls can leave the Divya world.

© Copyright tellybest.com, 2018 & 2019. All Rights Reserved. Unauthorized use and/or duplication of this material without written permission from tellybest.com is strictly prohibited.
Cached Saved on: Sunday 29th of March 2020 02:08:20 AM