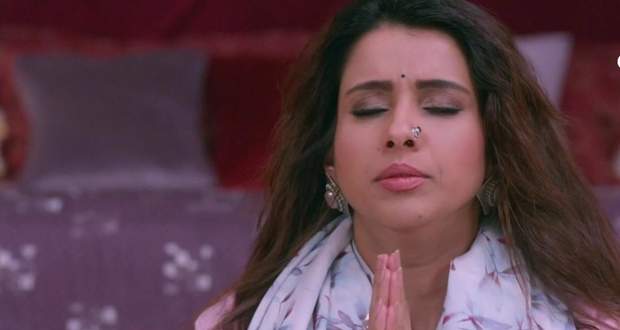 Today's Kawach 2 31 Aug episode starts with Sandhya and Angad getting worried about Bhau.

She goes upstairs straight in Ankit’s room and starts touching him. He thinks it is Shobha but it turns out to be someone sent by Bhau.

Later, they all start searching for Ankit but are unable to find him. Shobha hears some voices and sees a crow and runs away.

Meanwhile, the same girl in red saree comes in Balraj’s room and puts a hand on his head. Malini also starts searching for Balraj and can’t find him.

At the same time, some Vishal comes to teach Prem and flirts with Roohi.

Aastha and Prem hear the voice of Ankit from the bed. They come in Balraj’s room and hear his voice too. They both get scared to see something run away.

Rekha uses her powers to discover that Balraj and Ankit have turned into dolls. (tellybest.com) At the same time, the same girl comes to turn Kartik into a doll.

Later, Sandhya reaches a whole other place where she hears the voices of people asking for help. Bhau tells her to give Prem or else Shakini will turn everyone.

Roohi gets hurts by a crow while protecting Aastha and Prem. Rekha decides to get help from a book and gets information about Shakini.

Rekha decides to call Shakini but at the same time, many crows come to stop her ritual. Sandhya uses fire to get rid of the crows.

Rekha calls Shakini and demands to see her true face.

Upcoming Kavach season 2 episode update: Rekha discovers the truth about Shakini and that she will turn Angad.