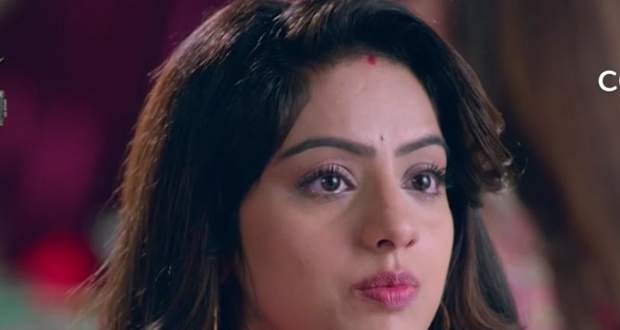 Today's Kavach 2 3 Aug episode starts with Angad announcing that Sandhya is pregnant. Everybody get delighted to hear the good news. Later, Sandhya reveals that the child is not their own.

Aghori Baba comes and says the child is of Kapil and Saakshi. He further says that he will be a normal child but will create a lot of problems.

He says Sandhya has to sacrifice at every step to raise this child and that the child will affect Angad and Sandhya’s relation as well.

Everybody start arguing over the child. Sandhya says she has made the decision to give birth to her child. She wishes to give justice to her sister.

Months pass by and Angad takes good care of Sandhya in her pregnancy. Sandhya wishes to name her child Prem.

At Sandhya’s baby shower, everybody gives her blessings.

After nine months, Sandhya gets very bad labour pain (tellybest.com original wu). She is not even in the condition to go in the hospital. Aaji decides to deliver the baby at home.

After some struggle, she gives birth to a healthy baby boy. Later, Sandhya has a bad dream with weird voices and evil spirits.

At the same time, Saakshi comes through the window to meet her baby and takes him along. Sandhya wakes up and finds Prem missing and gets worried.

Sandhya is determined to get her son back. After 7 years, a small girl named Aastha is shown playing around in Sandhya’s house. Sandhya’s daughter is very naughty and paints on everyone’s face.

Meanwhile, a guy reaches a haunted house and feels someone is there. The caretaker of that place informs that nobody comes to that place.