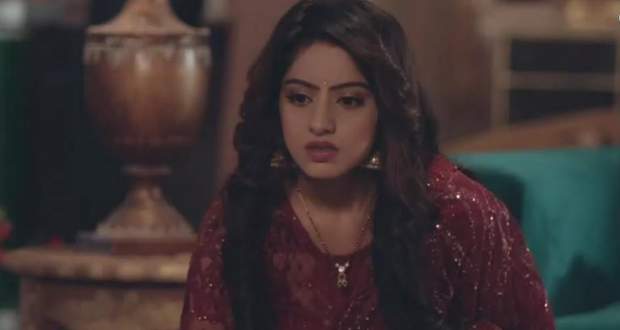 Later everything turns out to be Angad’s bad dream. Sandhya asks her what’s wrong, but he gets irritated.

Sandhya’s mother calls her saying her brother is not well. She leaves and messages Angad.

Meanwhile, Angad is trying to figure out some way to tell Sandhya the truth. He starts writing but is interrupted by strong winds. He realises only the paper in Shiva’s feet didn’t scatter.

He gets some idea and runs in the temple where the evil spirits can’t reach him.

Evil spirit gets restless and tells him to open the door.

Sandhya reaches his parental home and finds his brother in bad condition. He tells her about Angad being in the same building before Ashutosh’s murder.

He further says he is lying, but Sandhya is not ready to listen to a single word against him. She leaves abruptly.

The voices outside the door of temple subside, and Angad finds it weird.

On the other hand, Malini gets stuck in the washroom by an evil spirit. She sees some reflection in the mirror and gets scarred.

She falls in the bathtub, and the spirit enters her.

Meanwhile, Angad takes a plate and adds some Sindoor in it. He writes his message stating the answers are under Shiva’s statue.

Kashthi inside mother comes to the temple and orders to open the door or else she will kill his mother. The spirit starts slapping herself.

Angad is inside the temple and sees the evil spirit hanging his mother. Angad runs to save his mom, but it’s six and Kapil is back.

Sandhya comes home and finds her mother-in-law unconscious. She takes her to the hospital.

Everybody comes in the hospital, and Sandhya explains the situation to them while Manu is suspicious.

The doctor informs the patient has hurt herself, and everybody gets shocked.

Kapil is threatening Angad he will punish him for telling the truth. At the same time, Nisha comes and finds Angad in the air hanging himself. She gets scared to see this.

She starts running as but Kapil is following her to kill her with several actions while playing a mouth organ.

She hides in the curtain while Sandhya comes back home to take the file. He finds her behind the curtain and holds her by her neck.

Sandhya comes searching for medical files and finds Nisha scares. She runs away scarred without answering.

She misses out on a serious proof of Kapil’s photograph but realises it later. She goes back to find nothing.

Angad (Kapil) comes running worried about what has happened. He gets the information that Malini is alive.

Sandhya feels weird about whatever Angad is rumbling. He gets scared to learn; she will be conscious in a while.

Bhairvi and Manu discuss the whole situation, and Manu is suspicious about the events. Bhairvi assures everything is a coincidence.

Their conversation is interrupted by Angad saying weird things about murder and crime.

Malini gets conscious and remembers the events. She starts shouting, hitting her husband in the process.

She gets out of control and takes a knife in her hand. She keeps on repeating take him out and hurts Sandhya. They try to get her under control by giving her injection.

She tries to tell something which Sandhya figures out. Kapil closes his eyes and does something resulting in Malini’s vocal abilities to fail.

Sandhya is scarred to learn about Kashthi. Her mother ensures her she will talk to a pandit.

Meanwhile, Kapil (Angad) assures Kashthi that he remembers the next target is Manoj.

© Copyright tellybest.com, 2018 & 2019. All Rights Reserved. Unauthorized use and/or duplication of this material without written permission from tellybest.com is strictly prohibited.
Cached Saved on: Saturday 6th of June 2020 08:13:53 PMCached Disp on: Thursday 2nd of July 2020 02:43:45 PM