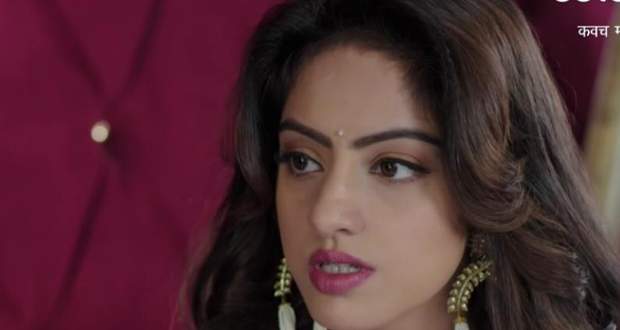 Today's Kawach 2 7 Jul episode starts with Kapil (Angad) planning party for Angad’s parents and ending Manoj’s life. Roohi finds something suspicious in the kitchen, along with some voices.

Dev is suspicious about Angad and again confronts Sandhya. He says Angad didn’t react to his mother being in that condition and Sandhya agrees.

They open the door and find Angad (Kapil) outside. He is suspicious about Dev.

Meanwhile, Pratibha finds Pandit and other priests are missing since 16th June. She decides to tell Sandhya’s family.

Later, Tushar Kapoor and Malika Shehrawat come to Angad’s house and meet Phuphaji. Tushar finds Kashthi in the bathroom and decides to leave but is stuck.

Malika also gets weird vibes from Angad (Kapil) and flickering lights. She also finds him slightly above the ground. They get scared and leave abruptly.

Angad (Kapil) apologizes to Sandhya for not keeping his promises. He assures Malini will be fine and that she is his only strength. He does all the drama to save his identity from being revealed.

Sandhya’s suspicions vanish with Angad’s words. She apologizes for misunderstanding him.

Meanwhile, Pratibha is being followed by Kashthi, who tries to kill her by hanging her on the tree. She starts reciting Shiv Chalisa and is saved by Shiva’s blessings.

She runs away but is stuck under a tree. The moment she stops reciting, the evil spirit enters her.

In the morning, everyone surprises Malini on her wedding anniversary. They celebrate by cutting the cake.

Angad (Kapil) and Sandhya both romance and dance in the rain while Sandhya is unaware of the soul inside Angad’s body.

He takes her in his arms into the bedroom. She stops him and goes to change. Upon her return, she finds Angad asleep and feels terrible for misunderstanding him.

In the morning, Sandhya is out of Sindoor and goes in the temple to find it. Sindoor falls from her hand, and while she goes to pick it up, she finds Angad’s message of finding answers under Shiva’s statue.

She searches the whole temple but is unable to find anything. She tries to tell Angad, but he ignores it. She asks him to put Sindoor, but the Sindoor burns in his hand.

She says if he has an allergy how he was able to write the message. He asks about the message, but Sandhya gets suspicious and lies about it.

Pratibha is possessed by Kashthi and is acting weird. She complains about body ache and says she never went to see the priest.

Sandhya is still suspicious and prays to Shiva to give her directions. Lord Shiva answers her prayers and he comes in the form of snake to show Sandhya the letter.

She is about to read the letter when Angad comes in. He gets scared to learn about the snake and leaves.

Sandhya reads the letter and gets to know the truth about Kapil and Kashthi. She remembers all the weird behaviour of Angad and realizes her suspicions were right.