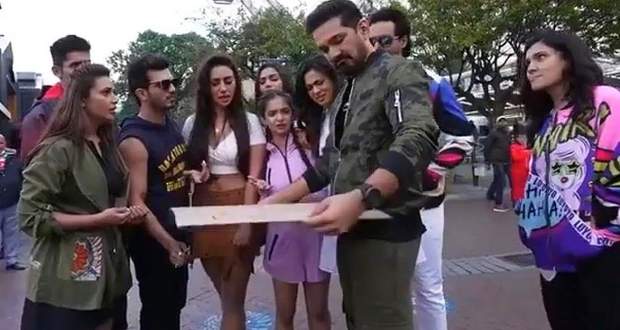 Today's Khatron Ke Khiladi 11 17 July 2021 episode starts with the first stunt was performed by contestants Shweta Tiwari, Arjun Bijlani, and Anushka Sen in which they had to get the flag from the Cheetah's cage and then get to the finish line before the Cheetah to complete the task.

In the end, Anushka got the first Fear Fanda of the season due to completing the task with the longest time duration.

Khatron Ke Khiladi's second stunt was to be performed by Aastha Gill, Rahul Vaidya, and Abhinav Shukla in which they had to walk on a plague high in the sky and stand on it with one leg to complete the task.

However, Rahul could not complete the take and hence was given the second Fear Fanda of KKK 11.

Khatron Ke Khiladi 2021 third stunt was to be performed by Nikki Tamboli, Saurabh Raaj Jain, and Divyanka Tripathi in which they and to guess a song by emojis, go into Hyena's cage to take the flag and give it to Rohit Shetty to complete the task.

Nikki got many penalties and hence got the third Fear Fanda of KKK11.