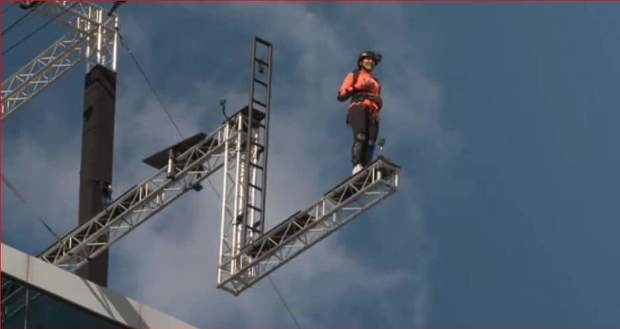 Today's Khatron Ke Khiladi 11 18 July 2021 episode starts with the first task consists of the pair having to get the flags attached to a giant ball that is suspended on the air. The KKK11 pair which gets all the ten flags in the lowest time wins the KKK task today.

From the competing pairs, Vishal Aditya Singh and Sana Makbul lose and get Fear Fanda.

In the KKK 11 safety task, Rahul Vaidya, Sana, and Vishal have to unlock themselves while being tied to a circular plaque and complete the task to remove Fear Fanda.

Vishal aborted his mission and hence still is in KKK 11 elimination while Rahul and Sana removed their Fear Fanda and got safe.

In the second safety task between Anushka Sen and Nikki Tamboli, they will have to guess the animal put on them while they are blindfolded and the contestant to get the most point wins the task.

Nikki aborts the mission due to her fear of insects and has to keep her Fear Fanda making her eliminated from KKK 11 show.

In the last safety task, Nikki and Vishal have to swim with snakes and catfish and go into the other tank.

Again, Nikki refused to do the task and aborted the mission after which she got eliminated from the show with the contestants' votes against her.

© Copyright tellybest.com, 2020, 2021. All Rights Reserved. Unauthorized use and/or duplication of any material from tellybest.com without written permission is strictly prohibited.
Cached Saved on: Monday 17th of January 2022 10:14:05 AM