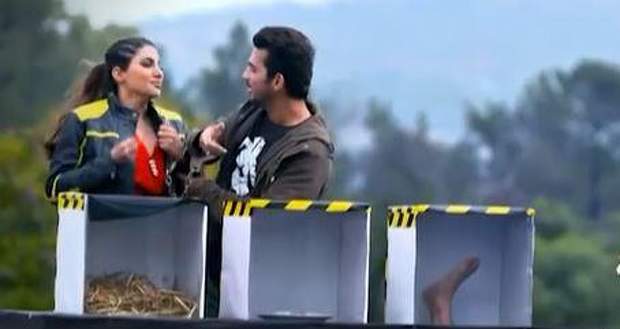 They get taken in a crate after which Rohit informs that all the contestants will have to bear Atyachar (Torture) as it is torture week for them.

In the first task, pairs of contestants have to transport lemons from one box to another by crawling through a cage filled with pigs while one of their leg being tied to the other person's leg.

From the pairs Sourabh-Shweta and Rahul-Aastha, the second pair loses and gets Fear Fanda.

Nikki Tamboli returns to the show and gets a second chance after doing the first task.

Next early morning, Anushka Sen, Varun Sood, Abhinva Shukla, Nikki, Sana Mukbul and Arjun Bijlani are taken and made to count pulses with the punishment of being tased if fallen asleep.

In the second task, the pairs are tied on each end of a metal block which will be pulled in the water and they will have to transport ten flags from one end to the other end.

From the above six contestants, Sana and Varun win while the rest get Fear Fanda.

Lastly, Vishal Singh, Mahek Chahal and Divyanka Tripathi are made to sit in a cold storage room for 2 hours and then made to do the third task.

In the third task, the contestant has to walk on the swings suspending over water and reach the other end.

Divyanka wins the task and the other two get the Fear Fanda.

© Copyright tellybest.com, 2020, 2021. All Rights Reserved. Unauthorized use and/or duplication of any material from tellybest.com without written permission is strictly prohibited.
Cached Saved on: Saturday 30th of July 2022 12:02:52 AMCached Disp on: Wednesday 17th of August 2022 03:36:23 PM