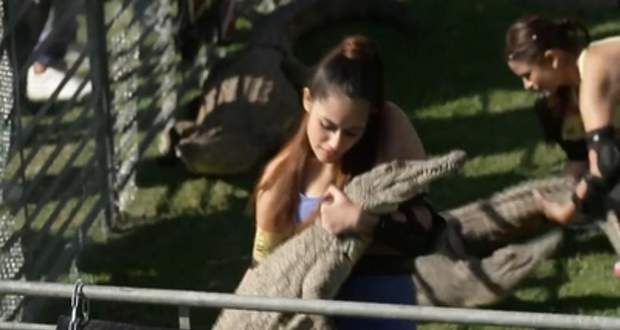 India's favorite daring and adventurous reality show Kahtron Ke Khiladi has returned with its new season 12 with Bollywood director and producer Rohit Shetty as its host.

In the latest promo of KKK 12 of 02-07-2022, the famous television actress Jannat Zubair is teamed up with the other KKK12 contestant, Chahat Pandey to perform their adventurous task.

Jannat and Chahat are given the task of transferring the crocodiles by carrying them to the other block. While performing her task Jannat gets injured and immediately receives medical help.

The audience will get to see their favorite contestants performing a lot of adventurous tasks and stunts in the first episode of Khatron Ke Khiladi 12 on 02 July 22 at 9 P.M. on Colors TV.

To get to know more, download Khatron Ke Khiladi 12 to watch or go online on voot.com to watch KKK12.

Check out the KKK 12 participants with their images here

Today’s Khatron Ke Khiladi 12 (KKK12) episode starts with the host Rohit Shetty welcoming all the contestants on the show in South Africa.

Sriti Jha performs an introductory stunt with a snake and on a rope bringing the Khatra Factor to the audience.

Rubina wins the helicopter challenge against Sriti Jha where both complete their stunt on a helicopter and untie themselves to get the flags down the ropes.

Pratik wins the stunt against Tushar, while Tushar gets the Yellow Fear Fanda.

Further, Jannat Zubair competes against Faisal Sheikh but lightens up the mood by making a reel together on Tip Tip Barsa Paani.

Later, Shivangi competes against Mohit for the Yacht Stunt which is time-based.

The players dive below the yacht to get the flag, hook it after coming outside and get the other two flags in each round.

Later, Faisal wins the stunt and Jannat gets the Fear Fanda.

Shivangi wins the stunt against Mohit and Mohit gets the Fear Fanda.

Further Aneri competes against Kanika in the stunt where both have to answer Rohit's questions by transferring the number of mice while their heads will be in a sphere filled with insects.

Kanika wins the stunt and Aneri gets the Fear Fanda.

For the next stunt, Rajeev competes against Chetna in the same stunt as Kanika and Aneri.

Rajeev wins the stunt and Chetna gets the Fear Fanda.

Further, Erika Packard and Nishant perform a stunt on the tire which is attached to an SUV and they have to unlock the tire as they proceed towards the SUV and dislocate their competitors.

Nishant Bhat wins the stunt and Erika gets the Fear Fanda.