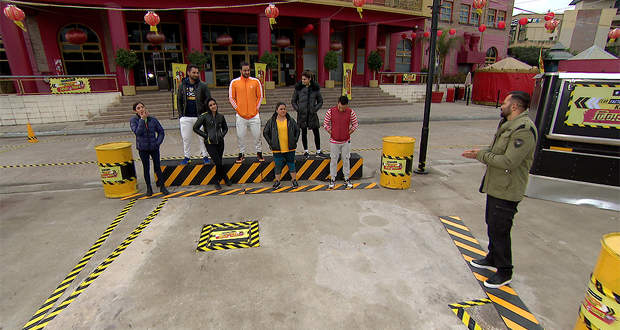 Today's KKK9 23 Feb episode starts with Rohit Shetty. He announced that this week the contestants won’t be fighting to survive, but will compete to win the ticket to the finale.

Rohit Shetty announced an act named Submerged Car. In the task, the contestants will be locked inside the car and the car would be downed.

The contestants have to unlock themselves and swim to the surface with a teddy bear which is kept in the back seat of the car.

Rohit Shetty handed them a Popsicle and asked to eat and give him the names for the task. Shamita Shetty and Jasmin Bhasin’s name appeared on the Popsicle’s stick.

Shamita Shetty won the task by completing it in less than Jasmin Bhasin.

Next, Ridhima Pandit, Aly Goni, and Aditya Narayan were asked to performing a moving Yart task where they had pick strips from a moving Yart.

The contestant who will wave the flag after picking out the last strip in less time will win the task. Ridhima Pandit consumed the maximum time and was out from the race.

Next, Bharti Singh and Puneet Pathak were up for the task. In the task, the contestants were asked to pick three bones, one by one, from a spot and drop it into another.

The hurdles in the task were the ferocious dogs. The dogs will attack the contestant and try to snatch the bone.

The contestant who could drop the bone on the other spot in less time would win the task. Puneet Pathak completed the task, whereas Bharti Singh was injured during the same.

Winners of the task, Shamita Shetty, Puneet Pathak, Aly Goni, and Aditya Narayan were still in the race for the ticket to the finale.

After a lot of motivation, Shamita Shetty agreed to perform the stunt.

© Copyright tellybest.com, 2020, 2021. All Rights Reserved. Unauthorized use and/or duplication of any material from tellybest.com without written permission is strictly prohibited.
Cached Saved on: Monday 29th of November 2021 07:36:34 PMCached Disp on: Wednesday 1st of December 2021 03:14:17 PM