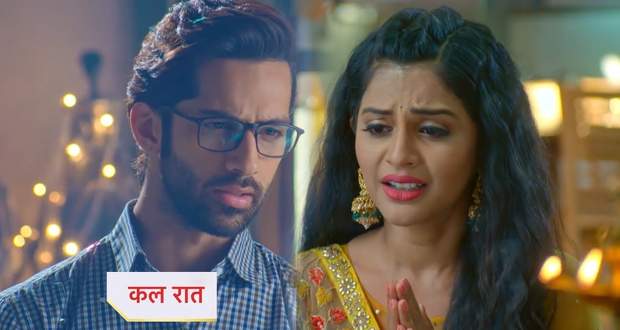 Today's Krishna Chali 6 Jun episode starts with Veer. He is talking to Krishna. Veer’s mother is standing outside and anxious to see the Pendrive in Veer’s hand.

She makes Veer leave the room to steal the Pendrive.

Veer discovers that his mother is behind everything. He gets devastated. He confronts his mother and accuses of bringing Mohan in their lives.

He disowns his mother and prays to never see her face again.

Veer’s mother told Veer that she did everything for him. She wanted Krishna to leave Veer and this was the only way out. Veer says he has nothing more to explain.

He asks his mother whether she has some respect for women or not. He adds that to fulfill her wish she was ready to trade Krishna.

Veer visits Krishna and tells that his mother was behind everything. Krishna feels bad and asks Veer to submit the evidence in the police station.

Just when Krishna and Veer are about to enter the police station, Krishna receives a message that Mohan has kidnapped Veer’s mother.

Veer and Krishna feel trapped. Mohan mocks Veer and says that he would have Krishna at any cost.

Veer and Mohan get into a fight. The cops stop them. Mohan starts pretending to be innocent.

Krishna takes to a corner asks to stop the nonsense or else she would hand over all pieces of evidence to the police.

Veer, Mohan, and Krishna leave. Mohan tells Veer that he fell for Krishna that why he waited so long.

However, now he knows that he is not getting Krishna so he would need the money in exchange for his mother.