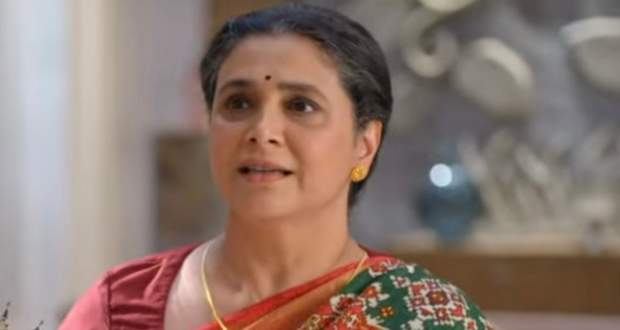 The next morning, Ishwari waits for Sonakshi to leave and then calls in a priest for Aayush's Naamkaran.

Mamaji tells Ishwari that she should talk to Sonakshi and Dev before changing Aayush's name but she refuses by saying that they won't understand.

Ishwari goes to Aayush and tells him to get ready for the Naamkaran ritual but he tries to convince her to call Sonakshi but fails.

Later, Ishwari tells the priest that she will sit with Aayush in the Pooja as his parents can't come and start the Pooja.

Meanwhile, Sonakshi is returning home as she has forgotten her file but Binoy calls her to come with him to the doctor.

The Pooja completes and the priest announces that Aayush will be now known as Ved Dev Dixit and he rushes to his room.

Ishwari calls Dev and informs him that she has done Aayush's Naamkaran and tells him to inform Sonakshi about it.

Elsewhere, Elina tries to search for her favorite earrings and feels that someone had definitely come into her room and stole it.

Later, Dev meets up with Sonakshi and informs her about the Naamkaran which makes her upset saying that she has to talk to Ishwari as what she did is wrong.

He tells her that he won't let her argue with Ishwari and she leaves saying that she won't come home then.

© Copyright tellybest.com, 2020, 2021. All Rights Reserved. Unauthorized use and/or duplication of any material from tellybest.com without written permission is strictly prohibited.
Cached Saved on: Thursday 2nd of December 2021 11:37:32 AMCached Disp on: Monday 6th of December 2021 02:51:50 AM