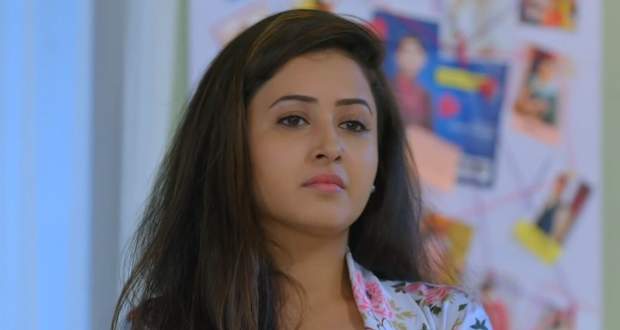 Today's Kuch Rang Pyar Ke Aise Bhi 3 14 October 2021 episode starts with Sanjana suggesting to know more about his mother-in-law as the project is dedicated to her.

Later, Sanjana reaches Bijoy's house and finds Sonakshi there. Sonakshi introduces Sanjana to Bijoy and she asks them some questions about Asha, Sonakshi's mother.

Sanjana tries to add poison to Bijoy's juice but fails to do so.

Before leaving, Sanjana intentionally leaves her dairy there as a reason to come back later.

Later, Sonakshi gets a call from the delivery guy. He informs Sonkashi that no one is answering the door.

Sonakshi calls Bijoy but he doesn't answer which makes her worried. She decides to go with Dev and check what's wrong.

On the other hand, Sanjana puts flowers on Bijoy's picture the way it is put on a dead person's picture.

Sanjana recalls how she when to Bijoy's house again for her dairy and asks for a picture of his wife. While Bijoy is gone, she pours water on the ground and leaves electric wire touching it.

Later, Sonakshi and Dev reach Bijoy's place and see him lying on the ground. Dev removes the wire and calls for an ambulance when Sonakshi notices a glass of water on the table.

At the hospital, Sonakshi is unable to handle herself seeing Bijoy's condition.

© Copyright tellybest.com, 2020, 2021. All Rights Reserved. Unauthorized use and/or duplication of any material from tellybest.com without written permission is strictly prohibited.
Cached Saved on: Wednesday 1st of December 2021 08:53:01 PMCached Disp on: Friday 3rd of December 2021 10:15:59 PM