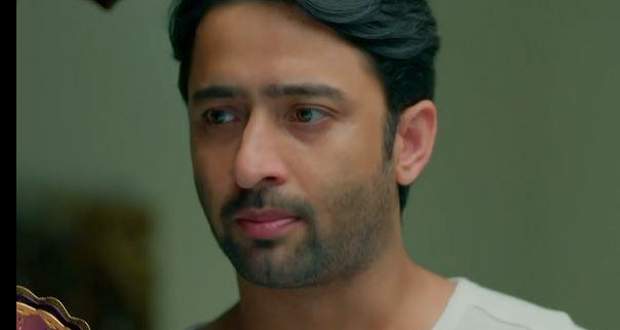 However, he doesn't eat and goes to his room after which Suhana sees Ishwari feeding Aayush and leaves taking her phone.

She calls Goli and tells him how much the family is giving love and attention to Aayush.

Meanwhile, Sonakshi tries to stop Ishwari from force-feeding Aayush and he starts vomiting.

Sonakshi tells Ishwari to not think of Aayush as Dev.

Dev goes to a shady place and gets a chit after which he tells Rohan to bet on the number written on the chit to get the land.

Sonakshi sees Aayush roaming in the house and gives him a snowman-shaped sweet and he is about to speak to her but she leaves to attend Suhana.

Later, Dev tells Sonakshi that Mr. Sharma wants to meet Suhana once and she starts freaking out while refusing to agree Aayush cries holding his father's portrait and Suhana leaves to complain to her parents.

She goes to Sonakshi and Dev and complains that she wants Aayush to leave when they see Aayush at the door.

He asks where will he go as his parents are dead and what is his fault as he cries because he missed them.

He leaves while Dev and Sonakshi talk to Suhana but she keeps being stubborn and tells him to send Aayush to the orphanage.

Aayush overhears them from afar and feels bad.

The next morning, Aayush sees a poster with note 'I HATE YOU' posted on his bedside.

Sonakshi gets angry seeing that while Ishwari fights with her and tells her to explain Suhana.