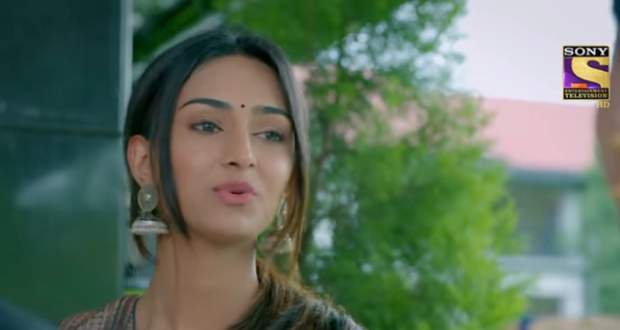 Aayush hears it and later asks Sonakshi and Dev about it while they try to explain the situation to him.

However, Aayush leaves saying that they told him to that they will not force him to address them as mother and father.

The next morning, Ishwari tries to bond with Aayush but he leaves there making her upset.

Meanwhile, Sonakshi sees Elina's chats with her stalker fan and warns her to be safe while Elina reveals that Ishwari purposefully send Suhana there.

Elina talks to her stalker fan and calls him an ugly old man which makes him mad.

Further, Sonakshi confornts Ishwari and tells her that she doesn't want her kids to become independent on their mother like Dev.

However, Dev overhears them and consoles Ishwari.

Elsewhere, Aayush gifts Suhana a paper crane and they bond but overhear Sonakshi and Dev fighting.

© Copyright tellybest.com, 2020, 2021. All Rights Reserved. Unauthorized use and/or duplication of any material from tellybest.com without written permission is strictly prohibited.
Cached Saved on: Wednesday 1st of December 2021 10:20:19 PMCached Disp on: Monday 6th of December 2021 08:51:43 AM