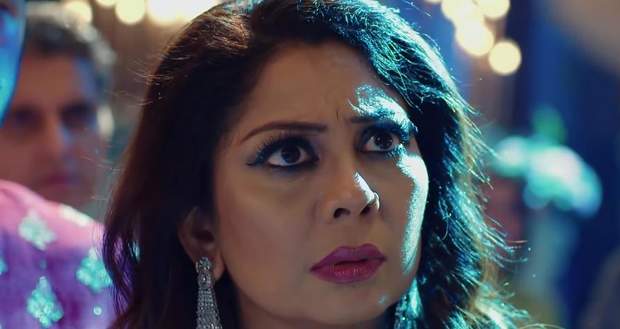 Today's Kuch Toh Hai Naagin 13 March 2021 episode starts with Rehan filling Priya's hairline and showing his face to her while she thinks that her plan to trap Rehan became successful.

The flashback shows Priya purposefully leaving her Dupatta in Mohit's room and then showing her face to him under the Ghungat.

The priest tells the couple to take the blessings of elders and Pam unveils Priya's Ghungat and gets shocked to see her in place of Soumya.

She asks her where is Soumya while everyone is shocked to see her.

They start insulting him thinking that she has married Mohit while Rehan reveals himself shocking everyone even more.

Pam asks him why he married Oriya while he says that he married her for his sister Soumya and she would have married Mohit if he had not married her.

At the same time, Soumya comes there and shows everyone her hands which had role marks on them while Pam says to call the police.

However, Rehan says that he will keep her trapped as his wife while Aru and Mini inform everyone that Mohit is nowhere to be found.

Later, Aru and Mini inform Ajnabi that Priya has married Rehan while Ajnabi tells them to get lost and they run away.

Ajnabi transforms into a Cheel and goes away where it is revealed that Soumya is the real Ajnabi.

She reveals that she wanted Rehan's all the demonic powers but Priya always stopped her with her angelic powers.

Rehan and Priya are having a stare-off while Soumya reveals that Priya is naive as she doesn't even know that Rehan was not in his senses the day he killed her and reveals her plan.

Elsewhere, Roohi and Aru are bad-mouthing Priya while Rags scolds them and goes from there.

Rehan and Priya are insulting each other while they think to kill each other but hold back deciding to give a painful death.

Reagan breaks his bed into two parts and outs a partition in between the two pieces while telling Priya to not show her face to him.

The next morning, Priya dreams of Rags warning her that her powers can overpower her mind while she is shown in her half-snake form.

They both think to cheer up Soumya by making her food and have a little competition in the kitchen.

Rags come to their house and greet Swati and Arnab while Rehan sees Priya going towards Soumya's room.

He overhears Priya trying to apologise to Soumya while Soumya drags her downstairs and he follows them.

She tells her to get out of the house while Priya tells the family to convince her but Pam insults her and bad mouths her upbringing.

Priya cries while Rehan gets irritated hearing the teardrops.

Priya goes past him while crying and Rehan gets a strange feeling hearing her tears drop.

He breaks the mirror and tells himself that he will not melt by Priya's tears.

Elsewhere, it is revealed that Pam is also a Cheel with Soumya who tells her that Rehan had killed Priya the day he got the power but she has some powers which kept her alive.

She says that they should let Priya kill Rehan and that they will kill Priya after that to gain both of their powers.

Later, Rags calls Priya while Rehan hears the sound and goes towards the phone.

© Copyright tellybest.com, 2020, 2021. All Rights Reserved. Unauthorized use and/or duplication of any material from tellybest.com without written permission is strictly prohibited.
Cached Saved on: Thursday 29th of April 2021 04:31:10 AMCached Disp on: Thursday 6th of May 2021 05:37:44 AM