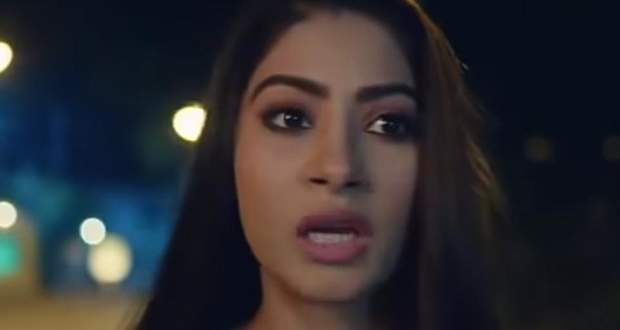 Today's Kuch Toh Hai Naagin 14 March 2021 episode starts with Rehan standing up to check Priya's phone but going back to his original position seeing Priya coming into the room.

Priya picks up the call while Rags tells her to meet her and Priya leaves while Rehan pretends to sleep.

Priya sees Soumya coming towards her and gets into her Naagin form to go without being noticed by her while Rehan wonders where Priya vanished.

Soumya takes Rehan with her while Priya wonders why there were talking weirdly.

Rags tells Proya to get away from Rehan's family while Priya reminds her how he killed her and that she will not leave without getting revenge.

Rags gives her the gift while Priya tells her to not get upset.

Rags asks her how she will kill Rehan while Priya responds that she is trying to find Rehan's weakness.

Soumya asks him why he was acting weird when she was scolding Priya while he apologises to her and reveals that he was having a strange reaction when Priya was crying and that he couldn't control himself.

He tells her that Priya's tears are affecting him which makes Soumya curious.

Later, Soumya is talking with Pam while Pam says that she will not leave Priya to ruin her plan that she did not much for.

She sees baby Rehan getting out his fangs in front of the crow and scaring him after which she takes him out of the window and flies off towards a place where she put the baby down and telling the baby that she will have his powers one day.

Later, she and Shashank are going home in a car while she falsely notices the baby and tells him that she wants to take the baby home after which she and her husband took the baby home as the flashback ends.

Pam tells Soumya that Priya might be dangerous for them if she is affecting Rehan and that they need to make her a weapon against Rehan.

Elsewhere, Priya mixes her poison with the burning wood and puts it near Rehan to see how much he gets affected by it but gets shocked seeing Rehan put out the fire effortlessly.

Mini gets a message from Ajnabi to bring Priya to the clock tower at night while Priya puts the holy water in the shower tap before Rehan goes to shower.

Priya hears him peacefully showering and is about to go while he puts his hand out of the bathroom and pleads with her to help him.

She does drama while he drags her inside and turns the shower on her while holding her and as a result soaking themselves.

Priya comes out of the room while Aru and Mini make fun of her but get speechless seeing Rehan also coming out of the bathroom.

They invite her to come with them and go downstairs to tell the whole incident to Pam and Soumya.

Rehan holds Priya's wrist to stop her from going with Aru and throws water on her again making her soaked while Aru and Mini enter the room.

Later, Aru tells Mini that it is late and tells her to message Priya at night by making an excuse and goes.

Mini is sleeping while Soumya switches off her phone after which she writes a note with her non-dominant hand and sends it to Priya.

Priya reads that note which tells her that Aru is waiting for her near the jungle and is asking to meet her.

Priya goes into her snake form and goes to the jungle while Soumya wonders how she went away without her noticing.

Priya goes to the jungle to see Rags lying unconscious and rushes to her.

She tries to keep her awake while Rags sees Ajnabi and warns Priya to be alarmed.

Rags dies while Soumya tells Pam that she has done a mistake by killing Rags who is close to Priya which can be dangerous for them.

However, Pam tells her that she did everything for a reason and flies to Rehan's room.

She then meditates sitting beside a sleeping Rehan and a purple smoke snake emerges.