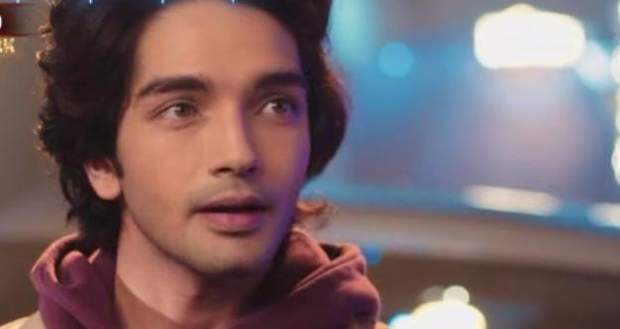 Today's Kuch Toh Hai Naagin 20 February 2021 episode starts with Swati and Priya reaching Arnab and Rehan's new cafe where she got the job.

Priya used her superpower and gets ready while Mohit tells her to make a latte for him.

Swati and Arnab are having a staring contestant while Rehan tells him to help him as Tina is after him.

Some guys tease Priya as she is trying to handle the latte in her hands while Mohit goes there to help her.

Priya accidentally spills it on him while Soumya helps him clean up.

Reagan comes there and tells the guys teasing Priya to address him as a coach while she announces that she is his girlfriend.

He holds her hands and suddenly the lights start flickering.
He tells the manager to kick out those guys and tells Priya to come with him.

Priya gets angry at him for ruining her first day while he tells her that he saved her from these girls.

She tells him that she knows he did the drama to get rid of Tina and that she hopes Tina finds someone better than him.

She agrees thinking that she needs the money while Rags sees them and thinks to separate them.

Meanwhile, Mohit is telling Soumya that Priya is too good for Rehan as he is a womanizer and doesn't have a heart of a human which tenses her, and she starts freaking out.

Rehan and Priya come there and he tells the manager that Priya will handle the cash counter and inventory.

Rehan goes after Priya to the inventory and gives her money while telling her to go to the spa and get dressed up.

However, she denies after which he uses his superpowers and locks her inside.

She unlocks using her powers while Rehan asks her how she did that.

She manages to get a hold of the spare key and shows him that.

Later, the family fixes a party to get the days for engagement and marriage of Swati and Arnab while Rehan suggests getting Soumya and Mohit married also.

Elsewhere, Aru and Mini talk about someone named 'Ajnabi' helping them find the spirit.

The Khurana's and Priya are about to leave for the party while Rehan comes and announces that he is there to pick up Priya as she is his official girlfriend.

Rags say that it cannot happen while Priya says that it is just a rumour and goes with him.

In the car, he shows her that Tina is in another car while she tells him to click pictures but he denies thinking that his true eyes will show in the camera.

He gives her his phone to click pictures with from the back camera and snatches the phone after Tina is gone.

They reach the party and Rehan keeps drinking while Priya says that she is going.

Everybody dances while Mini and Aru wait for Ajnabi.