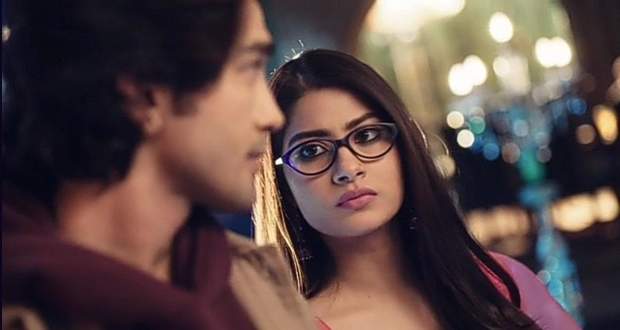 Today's Kuch Toh Hai Naagin 20 March 2021 episode starts with Siddharth receiving a call from someone telling him about Ragheshwari being outside. He finds Ragheshwari dead outside the house.

Priya watches them from afar and breaks down. Meanwhile, Rehan wakes up and finds Priya gone. He thinks she is meeting Mohit and fumes in anger.

Priya feels bad that she isn’t able to save her mother. She returns to Rehan while Rehan accuses her of being rejected by Mohit.

Priya accuses Rehan of being a monster and finds his hand bleeding. He starts turning into an AadiShaat while Priya turns into a Naagin.

Rehan turns and finds Priya missing. He isn’t able to see Priya’s Naagin form. Meanwhile, Priya thinks someone else is with Rehan and decides to find the truth.

Priya is pained to see her half-sisters crying while Rehan is angry and breaks all things inside the room. Mini comes into Rehan’s room and tells him that Ragheshwari is no more.

The next day at Ragheshwari’s funeral, Rehan apologizes for Priya’s loss and is able to feel her pain.

Later, Soumya and Pam discuss Priya’s next step and they are sure Priya is trying to find the truth about Ragheshwari’s death.

Priya remembers a bracelet that she found on Ragheshwari’s body and is able to see it at the funeral. She finds the bracelet in Soumya’s hand.

Pam remembers the time she killed Ragheshwari. Pam knew Priya is searching for the owner of the bracelet that’s why she gave the bracelet to Soumya.

Priya thinks Soumya has killed Ragheshwari to take revenge on her. Later, Arushi and Mini discuss some Ajnabi while Priya overhears this.

Shashank gets a call from Mohit while Rehaan gets angry. Shashank tells Rehan that he doesn’t know about Soumya’s reality about having criminal records.

Mini takes Arushi to a library and tells her that someone has done something with her phone. Priya overhears this and wonders who did it.

Priya finds a book and learns that the bracelet on Soumya’s hand is devilish. The police come to investigate while Priya reveals that Soumya is the murderer.

Rehan tries to defend Soumya and Pam also does drama. Shashank is ready to send Soumya to the police station while Soumya sneaks away from the scene.

Priya stops Soumya and asks the inspector to arrest her. Soumya turns into a Cheel and leaves everyone in shock.

Soumya runs away and Priya follows her. Priya locks the room and attacks Soumya. Priya takes her Naagin avatar while Rehan and Pam witness this.

Rehan enters the room and tries to save Soumya. He promises to expose the truth and asks Soumya to tell the reality. However, Soumya is not able to breathe and dies.