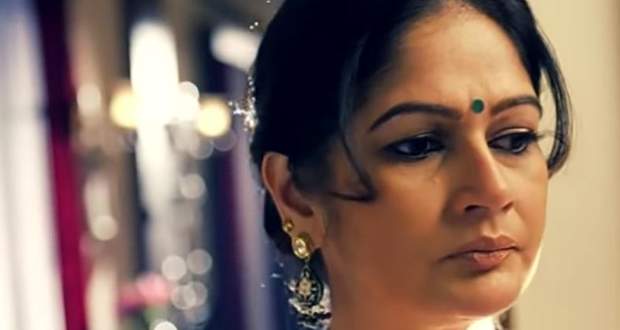 Today's Kuch Toh Hai Naagin 21 February 2021 episode starts with A person in back clothing comes and gives Mini a box while she dresses the person as 'Ajnabi'.

Kuch Toh Hai episode continues with Mini and Aru opening the box to find a bottle with fairy dust on with a note saying that the dust will lead them to the spirit.

However, Mini accidentally drops it while the dust starts going in a certain way.

Mohit notices that Priya is standing alone and drags her to the dance floor to dance with him.

Rehan sees them while Tina comes to him and Lester's him while telling him that his girlfriend is dancing with Mohit.

Mohit tries to get intimate with her while Priya stomps on his foot and gets away from him.

Rehan comes there and asks her why she was doing with Mohit while she reminds him that he is her fake boyfriend.

Tina comes there and tells Rehan to dance with her while Priya tells her that she doesn't share her boyfriend and goes to Rehan on the dance floor. (tellybest wu)

The host announces their dance and they dance to the song 'Maahi' without touching each other.

Rags goes to the storage unit and switch off the main switch of the whole house.

Meanwhile, the fairy dust settles on their legs but the Aru and Mini can't see because there is suddenly a power cut.

Reagan goes to check the switchboard and hears the jingling of Rags but she escapes before he can see her.

Rags puts a red velvet pouch in Priya's bag and act claustrophobic in front of everyone.

Lights again turn on after which Rags says that she brought traditional jewellery for Swati as a ritual.

Rags look in her purse and say that the jewellery is not in there and tells them to search in everyone's bag saying that it was in a red velvet pouch.

They check everyone's bags while the pouch comes from Priya's bag.

Rags insult her while Rehan says that they should check the CCTV camera.

Only the hand shows in the footage while Priya takes out her glasses and zooms in while realising that it is Rags' hand.

Later, Priya goes to Rags room and confronts her asking why she tries to frame.

Rags accidentally slips that she is trying to save her from danger and that she is her mother which shocks Priya.

Priya cries with her head in Rags' lap and tells her to reveal the whole truth while Rags members the memory of her putting Priya on the farm.

Rags reveal that she had become pregnant before marriage and had to give her up.

She says tells Priya that her father was an Angel while the flashback shows the same Angel who was with Bani.

Priya thinks that she will stay with her mother but will never reveal the secret to anyone.

Meanwhile, Rags thinks that she has to save Priya from Aadishat, (Vampire) Rehan as no one can know his intentions.

Priya thinks that Rehan helped her by proving her innocence which led to Rags confession.

Elsewhere, Rehan and others are playing truth and dare and Rehan is dancing while the fairy dust falls on him and he starts getting into his real form.