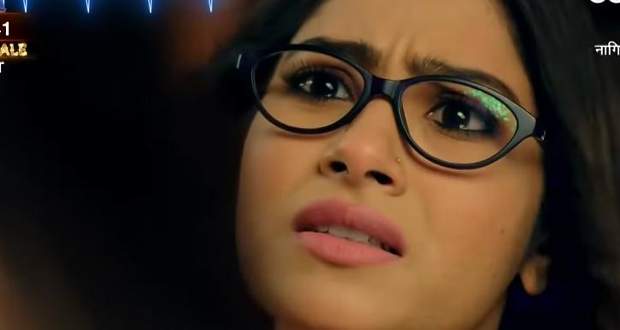 Today's Kuch To Hai Naagin 27 February 2021 episode starts with Rehan roaring in the middle of the night while Priya hears the noise and goes towards it on her bicycle.

Rehan reveals himself and she tries to run away when he catches her.

She struggles to free herself while Rehan puts his hand around her eyes and teleports both of them to the jungle.

He holds her hands and sniffs her neck while getting his fangs out.

Suddenly, he throws her unconscious body on the hay and wonders why can't he get himself to hurt her.

He says that he is there to find out about himself and tells her that he can't lose her while holding her by the neck.

He says that he won't allow himself to get near him and goes to caress her fave but retracts his hand.

He takes her in his arms and teleports themselves to her room.

He is about to kiss her but holds himself back and goes away wishing that she doesn't remember anything.

The next morning, Arnab tells Pam that his visa is confirmed and that he has to leave next which to which Pam plans to get the engagement done the same day and marriage after two days.

At the engagement party, Mohit asks Rags where is Priya to which she says that she is resting as she is sick while Pam tells Soumya to bring Rehan from upstairs.

Meanwhile, Rags goes to the mysterious lake and a man-like figure comes out while she tells him that Rehan will kill the holy spirit to gain his full powers and that she has to Priya.

Soumya goes to Rehan and gets scared of seeing his feral behaviour.

She shows her the paper slip while she tells him that it has today's day and that something might happen to him.

She decided to stay with him while he tells her to focus on her engagement with Mohit after which she goes.

Elsewhere, Priya regains consciousness and remembers Rehan's true form while reading the note that the family is at Arnab's house for the engagement.

She is about to leave while Rags comes there and locks her in the basement and makes her promise to not use her powers.

She says that Priya not only a holy soul but a pureblood also and that Rehan will feel the urge to suck her blood.

Aru and Mini call Ajnabi and tell them that they found a scroll earlier and saw the same date as of that day on it while revealing their suspicion on Priya being the ghost that they are looking for.

He asks her why they suspect her while they tell him about the sun-like tattoo on her neck.

He praises them and tells them to open Priya from the basement and Priya runs away from there to go to Rehan.

Suddenly, Rehan's body starts burning and he removes the feathers from the two slits on his back.

His nails start growing while he bites them off and puts tape and gloves over them.

Priya is on her bicycle when suddenly a bike hits her and she gets injured but doesn't heal it remembering Rags promise.

Swati and Arnab exchange rings while Rehan tells Soumya to hurry up as he can't stay long and wants to see her engagement.

Mohit and Soumya are seated opposite each other while he tells her that he can't do it cause he doesn't love her anymore.

Soumya tries to reason that he is drunk while he apologises to everyone and says that he has fallen in love at first sight with Priya which shocks everyone.

Rehan flashes from there while Rags notices him gone and tries to find him.

Rehan goes to Priya and she tells him that she knows his truth while he accuses her of having an affair with Mohit.

She tells him that nothing is going on between her and Mohit.

He asks her for forgiveness and tells her that it is not in control and that he did not choose for this life.

He tells her that he loves his sister Soumya and that he can't bear to see her in pain while and requests her to tell everyone that they are going to marry.