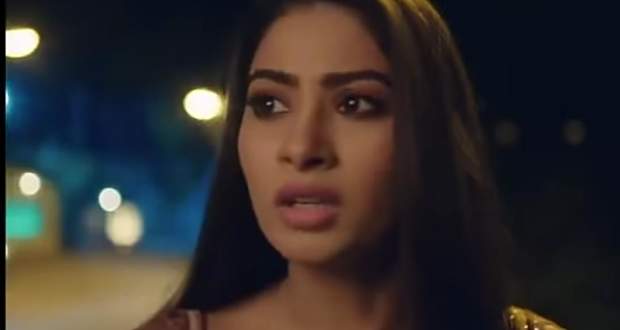 Today's Kuch Toh Hai Naagin 6 March 2021 episode starts with Rags threatening the lake to use the blessing given by the angel while the lake suddenly tells her to stop.

Arnab further rebukes him saying that he could have let Soumya down easily but he insulted her in front of everyone and humiliated her.

Suddenly, Rehan comes there and stands in front of Mohit while the family members look on.

Priya is shown lying on a strange platform while Rags runs towards her but a voice stops her and the man figure from the lake appears.

The man tells her that she is asking to change the fate but Rags defends saying that Priya's death was not in her fate.

The figure tells her that Priya has been killed by a fully powerful vampire's poison and that there is only one other poison that can bring her back to life.

He says that Priya was an angel's daughter before death but she will be changed after giving her the poison while Rags asks if Priya will be able to take revenge on Rehan.

The figure reveals that Priya get superpowers same as that Vampire but the way of usage will be fully in Priya's hands.

Rehan tells Mohit to ask Soumya for forgiveness and get engaged to her while Mohit says that he loves Priya which angers Rehan.

Rehan entrances everyone except Mohit and gets into his real form.

He puts his hand around Mohit's neck and flies upwards.

He threatens him to get engaged to his sister or die and brings him back to their home.

He removes everyone from the entrance and asks Mohit if he will get engaged to Soumya and he says yes.

Meanwhile, Priya gets lifted off into the air while a giant black snake comes there and days that Priya will be given the poison of the greatest Naagin's to bring her back to life and calls other Naagin's namely Shivanya, Shivangi, Bela, Vrinda and Bani who all come in their snake forms.

All the Naagin's show their face and inject their poison into Priya and disappear with the black snake while Priya comes back down.

She starts withering while Rags goes to her and tells her to open her eyes when Priya opens her eyes.

Priya tells Rags that Rehan is a monster and she will kill him by the powers given to her while Rags says that she supports her but they don't know if she has gotten any powers and should wait for some time.

Elsewhere, Rehan stands on the edge of the roof while drinking and tries to recall what happened from the moment be brought Priya to his room to change her.

He asks nobody where is Priya and why can't he remember anything while a snake-like shadow looms over him who turns out to be Priya.

Later, Rehan is remembering his moments with Priya while snake Priya comes through the window and gets into her human form.

She whispers into Rehan's ear that he thinks only about himself and his family as he didn't listen to her and killed her.

She says that this Naagin will kill him with the help of power given to her by other Naagin's while he looks back to find no one.

The next morning, both the families are having fun teasing Mohit about pranking with the dumping Soumya trick and defames Priya calling her a gold digger.

Rehan comes there and says that he wants to talk to Mohit and takes him away from them.

He again threatens him while Priya comes to his house in snake form.

She gets into his human form while Rehan feels her presence and goes to look for her.

He fails to find her while she looks over him from the ceiling in her snake form.

Later, Rags gives food to Priya while hiding from everyone and asks her if she ever has feelings for Rehan.

Priya thinks about her moments with Rehan and responds that she didn't have any feeling before but now she has the feeling of hatred towards him.

Later, Rehan sense that Priya is in his house and looks for her.

Meanwhile, Priya goes to Mohit and entrances her into her magic and tells him that he will do what she wants and he agrees.

Rehan suddenly barges into the room and asks him whom he was talking to while she says that he was just talking to himself.

Rehan finds the Dupatta and goes out while Soumya notices him and asks him who's Dupatta is it?

He says that it is of the girl he's interested in while Soumya realises that it is Priya's and asks him about it.

He reveals his speculation that Priya has come back.