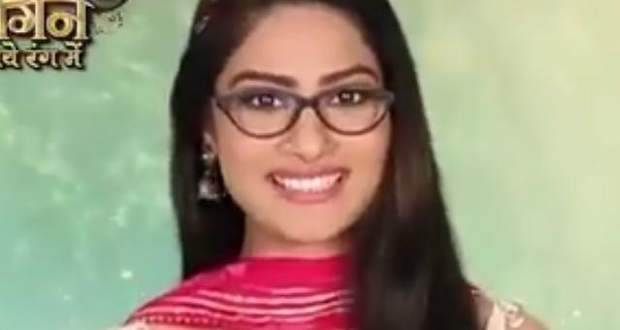 Later, the principal does her hair while some come there and shout Rohini.

They go out to the ground to see Rohini standing on the edge of the terrace.

Priya goes to her and tries to convince her to live and that living in an orphanage is not a bad thing.

They fall but miraculously both of the girls are fine while Priya secretly treats her wounds.

The boys upload the video of the incident while the principal recalls when she met baby Priya and her having extreme powers.

She took her in her hands and saw a picture underneath her of Bani with some girls.

In the present, the principal packs Priya's bags and tells her to go away as the media will come there anytime and gives her the picture of Bani with other girls telling her that one of them is her mother.

Priya jumps from the window and goes in the cycle in super speed while Minnie and two other girls talk about catching a ghost.

Elsewhere, Priya zooms in on the picture of Bani and sees the board of Mount Mary School in Missouri.

The next day, Vinny and the two girls are in Missouri while Priya also reaches there.

Priya reaches there while Aarnav goes to her and tells her that Swati's father handles PG.

Priya forgets her purse at the table and goes after Swati and gets her number on a napkin.

However, Priya gives the napkin to Aarnav and goes with Swati to her house.

Later, Priya takes back her purse from Cafe and is about to leave while suddenly a snake comes there and she runs into the jungle.

Minnie and the other girl sees her while Rehan is also at the other side in the jungle when suddenly the birds start falling to the ground.

Later, Rehan is about to leave while Minnie addresses him as her brother.

Rehan sees Priya and looks on while she goes.

Rehan hears a girl screaming for help and he goes there and gets the guy in a headlock and tells the girl to run away.

Rehan fights with him using his superpowers and sucks out his blood.

© Copyright tellybest.com, 2020, 2021. All Rights Reserved. Unauthorized use and/or duplication of any material from tellybest.com without written permission is strictly prohibited.
Cached Saved on: Thursday 18th of February 2021 11:58:34 PMCached Disp on: Monday 1st of March 2021 12:27:28 AM