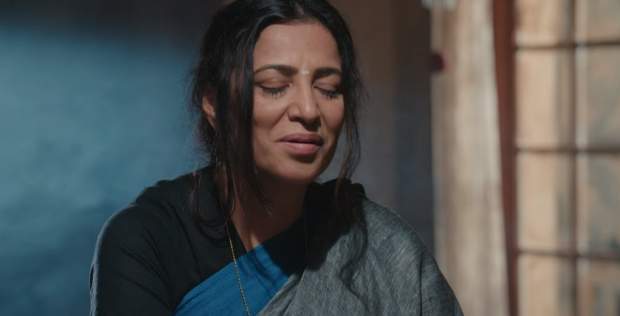 Today's Kulfi Kumar Bajewala 10 Dec episode starts with Sikander telling Kulfi about Vijayalakshmi and her achievements. He also reveals her personality and hobbies.

They reach her house and ring her bell. Nobody comes out to open the door while later a lady comes out in a terrible state. Kulfi questions if she is Vijayalakshmi while Sikander greets her.

Vijayalakshmi asks him to come inside and offers him to sit. She calls for a servant and starts talking about weird things. Kulfi gets scared and wants him to leave.

Sikander gets a call from Lovely who shows her concern about his words about regretting working with Tony. Sikander ignores her and cuts the call.

Later, Kulfi and Sikander find Vijayalakshmi standing weirdly in a room in dark. Sikander calls Revti while she wants Sikander to leave from there.

Vijaylakshmi stops him and starts shouting at him. She accuses him of spoiling her life and running her career. She shows him empty walls where she was supposed to hang her achievements.

She starts singing a song later and Kulfi gets happy to hear her sing. She later starts accusing Sikander of being a thief and thinks he is there to robe her.

Meanwhile, Lovely decides to take control of her life and do something for herself and Amyra. At the same time, Sikander learns that Vijayalakshmi suffered a lot because of him.

Sikander doesn’t want to leave Vijayalakshmi while Kulfi wants to go to Chandnor to get him treated.

Upcoming Kulfi Kumar episode update: Sikander decides to recreate the moment from 10 years before in front of Vijayalakshmi.