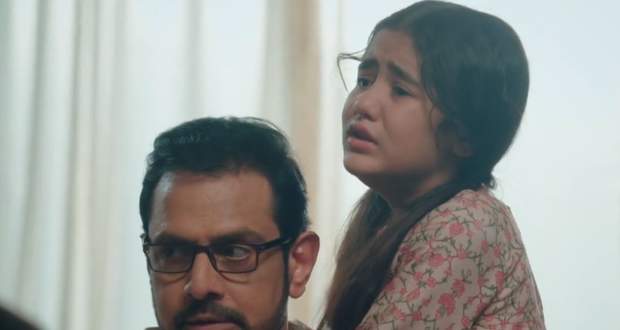 Today's Kulfi Kumar Bajewala 12 Jul episode starts with Mahinder calling himself Kulfi’s father. He promises her he will make her a star, and upon failing, he will leave music forever.

Meanwhile, Amyra is delighted with Sikander’s decision while Lovely is worried.

Mahinder is adamant about getting Kulfi her rights and Gunjan agrees. She asks how he will do it as they both are launched as a duo.

Lovely says to Amyra she is Sikander’s only daughter and advises her to stop thinking about Kulfi.

Sikander gets angry at Amyra and takes a promise of not doing it again. Later, Sikander brings Kulfi outside to talk and apologize.

Sikander wants Kulfi to obey Mahinder as she obeys him. Kulfi gets scared that she will lose her real father, but he promises he will console his brother.

In the morning, Mahinder calls the media and announces that Kulfi will sing alone. Sikander gets upset to hear this.

He gets showered with several questions from media regarding his daughter Amyra’s launch.

Later, Lovely provokes Sikander to take action. Sikander is disappointed with Amyra’s actions. He wants Amyra to understand that Kulfi is his daughter.

Gunjan is happy to be Kulfi’s mother. Mahinder promises her that he will never let her down. Sikander interrupts him and tells him not to break the family.