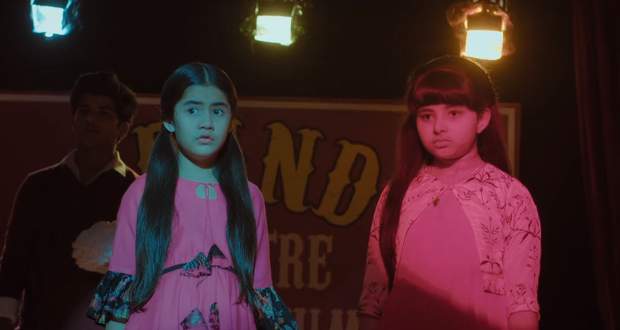 Today's Kulfi Kumar Bajewala 13 Aug episode starts with Amyra announcing that her father is Sikander Singh Gill. Everybody is waiting for Peter while Amyra tries to embarrass Kulfi.

Kulfi takes it very lightly and mixes up with her co-stars easily. Later, Peter informs Sikander that Ritu will come to see the play and will fund only if she likes it.

Kulfi feels Sikander’s presence and starts searching for him. At the same time, Amyra also starts her search for the producer.

The owner of the auditorium informs Sikander that Amyra and Kulfi are approaching the dressing room.

Meanwhile, Gunjan decides to send some of Amyra’s belongings to Kulfi. Lovely warns Gunjan to not say a single word against her daughter or else she will not think twice before crossing her limits.

Sikander enacts like a wax statue to fool Amyra and Kulfi. Later, Peter wants Kulfi and Amyra to learn their lines properly to impress Ritu Torani.

The rehearsals start and Kulfi is not able to speak her lines properly. The other actors start arguing over hiring an unprofessional actor for the lead role.

Peter gets angry and declares the play is over. Sikander tries to console Peter and gives him an idea to unite the play team.

All actors are asked to move props from the left side of the stage to the right side. Kulfi starts singing a song about the task given to them. She gets an idea and they create a chain to move the props easily.