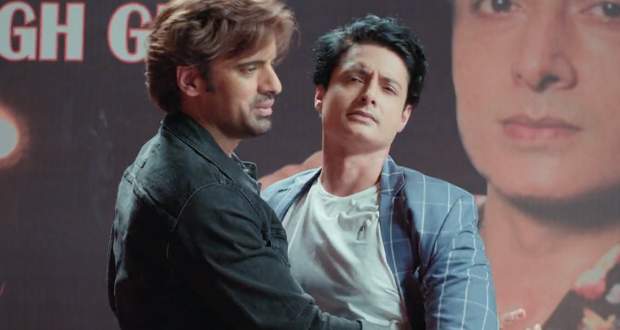 Today's Kulfi Kumar Bajewala 13 Nov episode starts with Kulfi witnessing Sikander getting violent with Raju Mummy. Sikander gets ashamed of his actions and swears on his music that he wanted to save him.

Sikander says he can’t lie anymore and wants to stop his actions. Raju Mummy understands his problem while Kulfi thinks he is worried about their poor state.

Sikander gets ready for his album launch and reaches the venue with his daughters. Jimmy is also present at the launch while Mohsin Khan arrives on stage.

Jimmy instructs a waiter to put some medicine in Mohsin’s drink. At the same time, Sikander starts talking to the media and talks about his album.

Mohsin Khan feels dizzy and can’t stand still on the stage. Meanwhile, Himmat wishes to get some company on her trip to Kartarpur.

Mohsin talks in a drunken state to media and gets rude with the media. He later gets unconscious while the media makes fun of Mohsin.

Sikander has to postpone the release while he later sees Jimmy smiling at him. Later, Kulfi and Amyra compose a song to encourage Sikander.

Sikander on the other hand calls Jimmy and reveals all the bad things he has done with Jimmy. He further gives an open challenge to Jimmy and threatens to destroy him.

At the same time, some goons arrive at Sikander’s old house. Later, Amyra gets a call from someone who asks them to save their father. Kulfi and Amyra reach their old house where lights fluctuate and they try to search for Sikander.