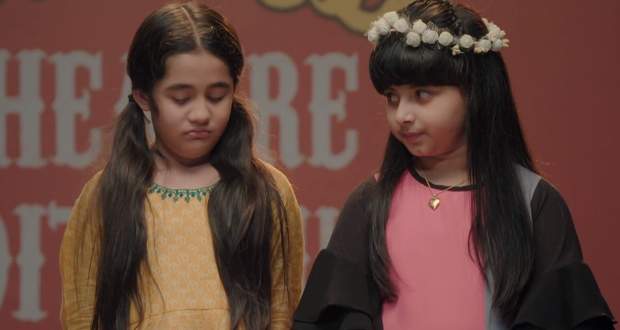 Today's Kulfi Kumar Bajewala 15 Aug episode starts with Kulfi denying to do the play. Peter tries to cover up the situation and says he will bring the statue of Sikander out. Meanwhile, Gunjan is bribing a guy in telling the truth against Lovely.

Peter brings Sikander on the stage but Kulfi exposes him by pinching him. Sikander tries to convince Kulfi in forgiving him and doing the play.

Kulfi comes in the dressing room and tells Amyra about Sikander being behind the play. Kulfi and Amyra later inform Sikander that somebody wants to spoil the play.

Amyra and Kulfi whisper something and declare they will do the play. Later, Peter informs Amyra that she is also in the lead role in the musical.

Sikander says they all broke, fought and again rose to perform in the play. He says the 60 minutes of the play will be important.

Two men come and say the play will not take place in the auditorium. They say that the property belongs to Jimmy and not Feroz. Meanwhile, Tia comes to show her report card to her mother.

Mia gets mad at her for not getting good marks.

© Copyright tellybest.com, 2018 & 2019. All Rights Reserved. Unauthorized use and/or duplication of this material without written permission from tellybest.com is strictly prohibited.
Cached Saved on: Thursday 30th of January 2020 10:10:17 PMCached Disp on: Saturday 22nd of February 2020 08:44:39 AM