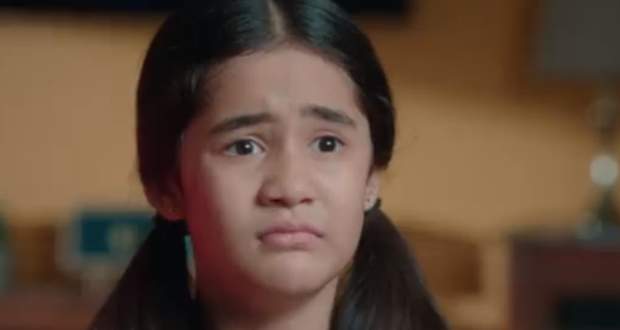 Today's Kulfi Kumar Bajewala 1 Aug episode starts with Sikander aka Murphy taking Kulfi somewhere. Kulfi realizes the road is going to her father’s house. He tells her she should go to her house as she is homesick.

Kulfi tells him to stop the car as she doesn’t want to go there. Murphy asks her to come with him to his home instead.

Sikander calls his friend who is in Drama Company and tells him to arrange home and some actors.

The friend tries to tell everyone about their role. He creates a whole family for Murphy, including mother, wife and elder brother.

Murphy introduces Kulfi to his whole fake family. The scene turns out to be rather funny with Murphy himself not knowing who those people are.

Two small Sardaar boys come running in the hall. Sikander aka Murphy says they are his sons. Kulfi gets confused as he had earlier said he has two daughters.

Sikander gets successful in covering up his mistake. Kulfi gets happy to meet everyone and says thanks to Murphy for bringing her to his home.

Upcoming Kulfi Kumar episode update: Vikram wants Kulfi to sacrifice some things to get success just like her father.