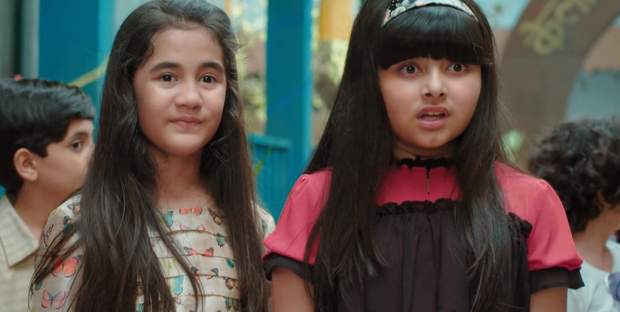 Today's Kulfi Kumar Bajewala 1 Nov episode starts with Kulfi and her friends asking the egg vendor about someone taking a gold coin. The vendor gets the order of 100 eggs and sends off the kids without answering.

Kulfi and Amyra return disappointed and Sikander questions about their sad faces. Sikander explains them using various examples to never give up.

Sikander remembers how he planted the coin in the mud. Kulfi and Amyra learn from Sikander’s lessons and decide never to give up.

Later, Sikander shows the whole jewelry and money to Sandy. Raju mummy wonders what they will do of the money while Sikander wants to use it in building his empire.

Mohsin Khan is upset with losing money while Sikander wishes to make a video with him. Sikander asks who took his money and Mohsin Khan tells his name.

Sikander says it is his uncle and can try to get his money back. He later says his uncle is ready to return everything while Mohsin gets delighted.

At the same time, Kulfi and Amyra learn about a Mahabali Pehalwan who takes anything that comes in his area. They deduce that their coin is with the wrestler.

Raju mummy as an income tax officer returns Mohsin’s money while Mohsin says he will not charge Sikander for the music video.

Kulfi and Amyra along with other Chawl kids reach the Akhada of the wrestler. They find Yusuf getting beaten up by the wrestlers. Kulfi later sees her coin with Pehalwaan before leaving.

Upcoming Kulfi Kumar episode update: Kulfi and Amyra get delighted to learn that Sikander is going to make music again.