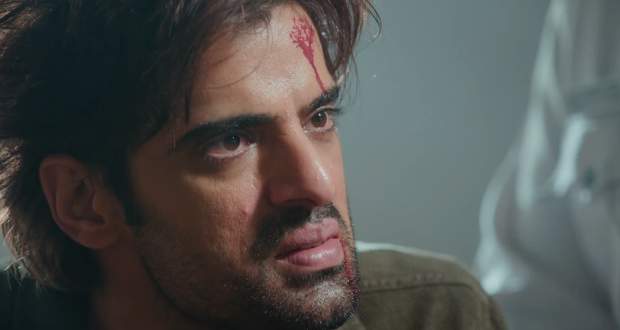 Today's Kulfi Kumar Bajewala 24 Sep episode starts with Sikander trying to get the CCTV footage at the police station. Police asks Sikander to file an FIR and give photo while Sikander learns his phone data is deleted.

Meanwhile, Kulfi is making a music video and find a way to not be in the video herself. She decides to dress as a lion in the video.

Sikander reaches home and discovers Amyra’s belongings are missing. He even can’t find any record in her school. Further, he can’t even reach any of her friend’s phone. He returns police station and they also refuse to recognize him.

There is no FIR in the police station and someone is planning a huge plot against him. Sikander gets angry and gets into a fight with police.

He is beaten by the police while Kulfi starts recording for the contest. Kulfi deposits the CD but hides under the table as Jimmy enters the office.

Sikander is not able to search for Amyra on the internet. Meanwhile, Kulfi struggles to hide from Jimmy and gets hurt in the process.

He again reaches the traffic police office to see the footage. Some good officer agrees to show him the footage. The footage is also not available on the laptop.

He says somebody has deleted the footage and gets in an argument with the officer. The officer asks to bring the police officer. Meanwhile, Kulfi sees Jimmy talking to someone about destroying Sikander Singh Gill.

© Copyright tellybest.com, 2018 & 2019. All Rights Reserved. Unauthorized use and/or duplication of this material without written permission from tellybest.com is strictly prohibited.
Cached Saved on: Friday 31st of January 2020 03:53:25 AMCached Disp on: Saturday 22nd of February 2020 10:12:57 AM