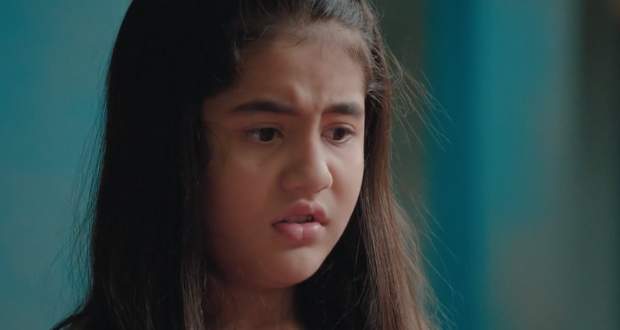 Today's Kulfi Kumar Bajewala 27 Aug episode starts with Amyra getting worried about staying without AC. At the same time, her friend Samaira comes and enquires about her presence in the Chaal.

She lies that she is doing some project but a girl behind her reveals that she lives in room number 11.

Amyra starts crying and says she will be made fun of in the whole school. Kulfi tries to cheer her up by feeding her jam biscuits.

The Chaal members try to find out a way to get Sikander out of the Chaal. Amyra and Kulfi also come along with Sikander to enquire if they are doing a surprise party for them.

They say that people staying in room number 11 are always their enemies.

Kulfi decides to find out the secret behind room number 11. Later, Sikander feels problem in breathing and comes out of his room.

Himmat Kaur takes care of him and tries to console him by saying his both daughters are with him. In the morning, Amyra gets in a fight with a girl.

Himmat Kaur tells all three of them to go in the back of the line. Later, Kulfi tries to console Amyra and says the place is best for them to live.

Upcoming Kulfi Kumar episode update: Kulfi listens to the plan of their neighbours about cutting their electric connection.

© Copyright tellybest.com, 2018 & 2019. All Rights Reserved. Unauthorized use and/or duplication of this material without written permission from tellybest.com is strictly prohibited.
Cached Saved on: Saturday 6th of June 2020 09:13:03 PMCached Disp on: Thursday 2nd of July 2020 03:20:04 PM