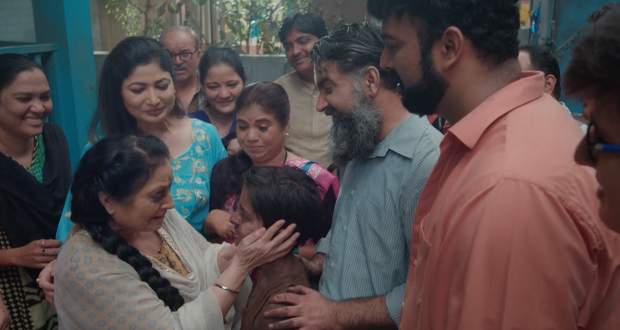 Today's Kulfi Kumar Bajewala 30 Aug episode starts with Amyra and Kulfi along with other children trying to find Matka. The neighbours are scared about someone being behind the door.

Meanwhile, Amyra and Kulfi find a boy in the room dressed like a scarecrow. At the same time, Sikander finds his daughters missing and starts searching for them.

Sikander and all the other neighbours reach the back storeroom and find their kids scared. Himmat Kaur says she will find out the real culprit.

Neighbours again plan to take revenge from Sikander and his family. Kulfi tells Amyra she thinks there was no ghost and it was Matka only.

She further worries about Amyra wasting a lot of water while bathing. In the morning, the neighbours blame Amyra for emptying the whole water tank.

Sikander apologizes for his daughter’s mistake but the neighbours want them to move out. The neighbours further threaten Himmat Kaur of moving out.

Himmat tells Sikander to leave while neighbours get their stuff from their room. Kulfi speaks in a high tone and blames all the Chaal people for not having a heart.

She further blames them for behaving in the same way with Matka. Later, Matka comes and everyone gets delighted to see him.

They all get into an emotional reunion and the neighbours accept Sikander and his family.

Upcoming Kulfi Kumar episode update: Sikander sings in a private party but is later asked for the payment from Jimmy’s employees.

© Copyright tellybest.com, 2018 & 2019. All Rights Reserved. Unauthorized use and/or duplication of this material without written permission from tellybest.com is strictly prohibited.
Cached Saved on: Thursday 2nd of April 2020 06:10:56 AM