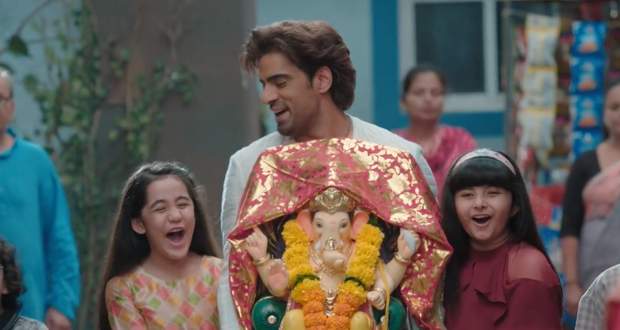 Today's Kulfi Kumar Bajewala 5 Sep episode starts with Sikander telling that he got a job in the same restaurant. He gives them an idea of making the idol of Ganpati with mud and paper.

He goes to pay the bill and finds out he is out of money. The manager comes and gives him his tips back along with the bill.

Lovely is again threatened by Kamini while Nihalo says they need coal for the blast to distract jailors. Meanwhile, Sikander helps the kids in making Ganesh idol.

Sikander makes a beautiful idol of Lord Ganesha which shocks everyone. They all do the Sthaapna of Ganesha while Lovely hides something in her slipper.

Kamini sees the small wrapped piece with Lovely but still says nothing.

Kulfi receives money from everyone in the Chaal for bringing material for Ganpati celebrations. Amyra says she will believe Ganpati is with them only when she gets AC.

At the same time, Amyra’s Naanu comes along with AC. He mocks Sikander about poor and having a small room.

He further asks if Sikander will keep Amyra in such a condition and also insults Kulfi. Amyra refuses to go with her Naanu but gets happy with the AC.

Later, Kulfi does something that makes AC throw black smoke. Amyra gets angry and tells her Naanu to leave with the AC.

© Copyright tellybest.com, 2018 & 2019. All Rights Reserved. Unauthorized use and/or duplication of this material without written permission from tellybest.com is strictly prohibited.
Cached Saved on: Thursday 16th of July 2020 08:09:28 PM