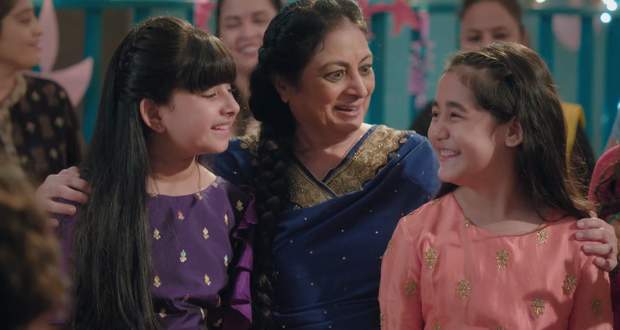 Today's Kulfi Kumar Bajewala 6 Nov episode starts with Kulfi and Amyra throwing sand in the eyes of wrestlers. The wrestlers protest but Mahabali Pehalwan says the girls have won.

He agrees to return their gold coin back while Kulfi is worried about other people’s money that is with Mahabali Pehalwan.

She wants him to protect people instead of stealing from them. Mahabali Pehalwan realizes his mistakes and declares he will never steal again.

Raju mummy informs Sikander that his daughters have won. Meanwhile, Sandy tells Jimmy the studio name in which Sikander is recording. Jimmy gets delighted as his people are working there.

Jimmy hears Sikander’s song and gets shocked to see him sing so well. He decides to make pirated CDs before the release of the original song. Sandy decides to find the address of his godown.

Later, Himmat Kaur praises Kulfi and Amyra’s heroic act of fighting and winning. Sikander also gets happy to think that his daughters can win battles without him.

Later, Sandy tries to find the address of the building. He has to talk ill against Sikander when Jimmy arrives in the room.

Sikander wants Amyra and Kulfi to light the oil lamps as it might be his last Diwali.