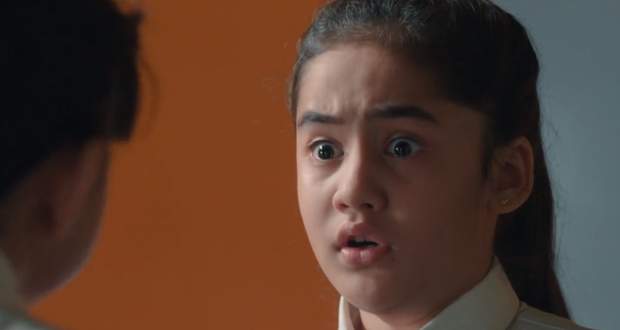 Today's Kulfi Kumar Bajewala 8 Jul  episode starts with Kulfi telling the whole class the name of her father. Amyra starts questioning her about her mother and how they are not married.

She explains the meaning of Najayaz word and how Kulfi is a perfect example. Kulfi says her parents got married and Amyra asks for proof.

Amyra’s insults result in the whole class speaking against Kulfi.

Meanwhile, Mahinder instructs Lovely and Gunjan to not create such scenes and spoil Sikander’s efforts of bringing the two girls together.

Later, in the lift, Amyra says to Kulfi if she wants to complain against her, she can go ahead.

They enter the home and Sikander gets worried to see Kulfi crying.

Kulfi lies by telling she fell and got hurt. Sikander believes her and tells them to eat and get ready for the launch.

Later, Sikander finds out from the school teacher about the whole event and starts shouting at Amyra.

He enquires about where she learned to say such things and Amyra tells him he is the one to teach her. He further gets angry, but Amyra leaves by saying he is not her father.

He says he will be on Kulfi’s side if any allegation is thrown at her by Amyra. Amyra gets shocked to hear this.

The school teacher is bribed by Mia to give all the information on Kulfi and Amyra. She gets delighted to learn the drift between the sisters is growing day by day.

Lovely tries to console Amyra, but she is not ready to understand anything. She wishes it would have been better if she had left with Tevar.

She tells her mother to choose one side. Kulfi sees the tension between Lovely and Amyra.

Amyra comes and apologizes to Sikander. He assures her he will be by her side always. He tells her the importance of relations and to accept Kulfi as her sister.

Amyra accepts Kulfi as her sister, but something is going on in her head. Sikander is excited about the launch of his daughters.

Upcoming Kulfi Kumar episode update: Sikander tells Kulfi he will announce that she is his daughter at the launch, which shocks Amyra.