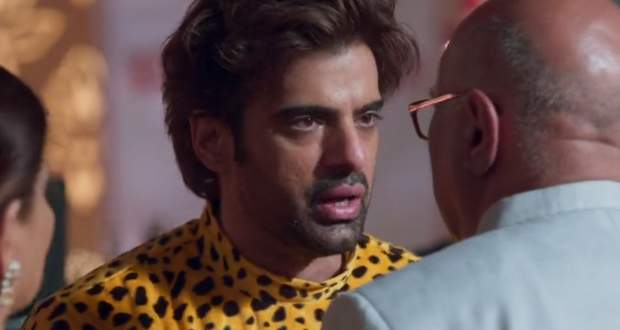 Today's Kulfi Kumar Bajewala 8 Oct episode starts with Kulfi and Sikander searching for Amyra. They come in front of Ajit but he is not able to recognize them as they make him dance.

Kulfi sees Amyra behind the stage while praying and shows it to Sikander. He finds Amyra in a storeroom and tries to wake her up. Meanwhile, Tony is asked to shoot the CM by Ajit. Sikander brings Amyra on the stage shocking everyone in the audience.

Tony is stopped by Lovely while he gets exposed in front of the CM. Lovely meets with her daughter and gets emotional.

CM apologizes to Sikander and wants him to do the Aarti. Sikander does the Aarti along with his daughters while Jimmy is upset with the flopped plan.

While doing Aarti Sikander gets suspicious of CM’s wife. His suspicions are confirmed when CM’s wife’s phone rings.

He tells CM that his wife is behind the attack. The person who was threatening Sikander is brought who turns out to be Bhau’s secretary Ashok.

Bhau gets disappointed in his wife but thanks Sikander for opening his eyes. Later, Lovely says she is going to jail and asks Sikander to wait for her.

Upcoming Kulfi Kumar episode update: Sikander and Kulfi are declared winners while Jimmy threatens to spoil his life even more.