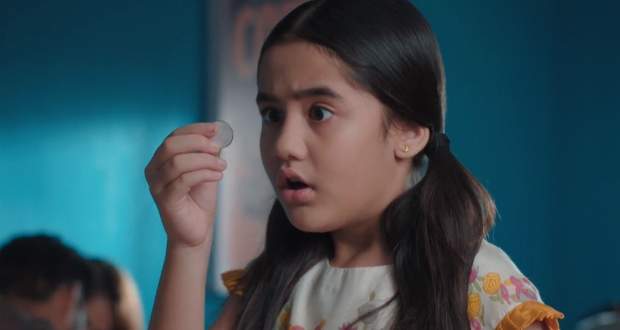 Today's Kulfi Kumar Bajewala 9 Aug episode starts with Sikander giving the spoiled coin to a beggar. Later, he realizes he made a mistake but turns to find the beggar is missing.

Later, Lovely gets mad at Sikander for not caring for Amyra. At the same time, Gunjan comes and starts criticizing Amyra and Lovely.

Mahinder gets angry at Gunjan for again and again talking about the accident. Meanwhile, Tia gets upset with Kulfi leaving the house.

Mia and Kulfi stop at a café to stall some time before the bus leaves. Kulfi wishes to order at the café and wants a miracle to happen.

Meanwhile, Amyra comes to give the audition for the musical. She speaks her lines with a lot of emotions and Peter gets delighted with her performance.

Kulfi calls Sikander but he cuts the phone. She meets Veena who will drop her at the boarding school.

Later, she uses the PCO to call her father. She puts a coin and another coin comes out. It’s the same coin which Kulfi gave Sikander to circulate.

Upcoming Kulfi Kumar episode update: Sikander tries to hide from Kulfi and Amyra at the auditorium.

© Copyright tellybest.com, 2018 & 2019. All Rights Reserved. Unauthorized use and/or duplication of this material without written permission from tellybest.com is strictly prohibited.
Cached Saved on: Tuesday 14th of July 2020 03:56:06 PM