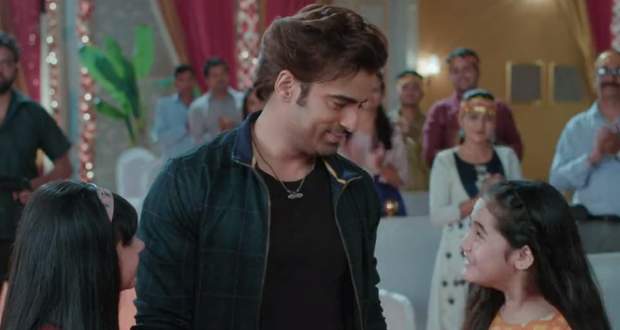 Today's Kulfi Kumar Bajewala 9 Oct episode starts with Lovely leaving with the police and asking Sikander to wait for her. She also asks Amyra to listen to whatever her Dadda says.

Later, CM asks Jimmy to announce the winner. The Bajewalas win the contest and Amyra and Kulfi get delighted with the news.

Everybody starts chanting SSG while Sikander regains his lost confidence. Sikander goes on the stage while Jimmy is not happy with the decision.

Jimmy wants Sikander to leave while Sikander offers him water. Sikander says he doesn’t want the award and his daughters are his biggest prize.

Sikander further reveals that Jimmy is behind Bhau’s murder and Amyra’s kidnapping. Bhau says he will collect proofs against Jimmy.

He gets into police custody and warns Sikander that he will destroy his life after coming out of jail. After 2 months, a person is shown who is held captive.

Meanwhile, Chawl doesn’t have light and water for 10 days and Amyra refuses to eat. Himmat Kaur says they will support Sikander in any situation.

Police arrive at the Chawl and start searching. The chawl members are held at gunpoint and police say they are planning something.

Police further say Jimmy’s son is missing and they are suspicious of Sikander.