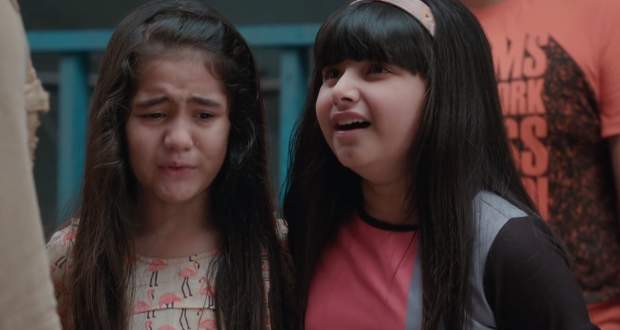 Today's Kulfi Kumar Bajewala 9 Sep episode starts with Kulfi reaching the area of thugs to search for Amyra. Meanwhile, Amyra loses some money and is threatened by the thugs.

Amyra says she will return their money after taking it from her sister. At the same time, Kulfi comes and the thugs get distracted while Amyra runs away.

Amyra calls Sikander and tells about Kulfi getting stuck in the Kaali Basti. Meanwhile, Kulfi hides in the Pandal while getting followed by the thugs.

She gets trapped by the thugs but Sikander comes at the right time to save her. He fights with them but later they get their weapons out to threaten him.

Nihalo makes a plan to kidnap Kulfi and use her for earning money. Later, Sikander’s boss comes to save him from the thugs.

Sikander questions Kulfi about going to Kaali Basti. He finds a lot of money with Kulfi and enquires about them as well.

Kulfi stays silent but Amyra interrupts and says she has bet the money. Sikander gets disappoints in his daughters while Amyra explains her situation.

Kamini complaints against Lovely and Nihalo while they both discover their bomb is wet.

Sikander tries to explain the meaning of respect to Amyra and tells her to learn to be happy in any situation. Raju mummy advises Sikander to punish Amyra.

Upcoming Kulfi Kumar episode update: Amyra promises Sikander that she will not make any mistake while Lovely and Nihalo escape jail in a truck.