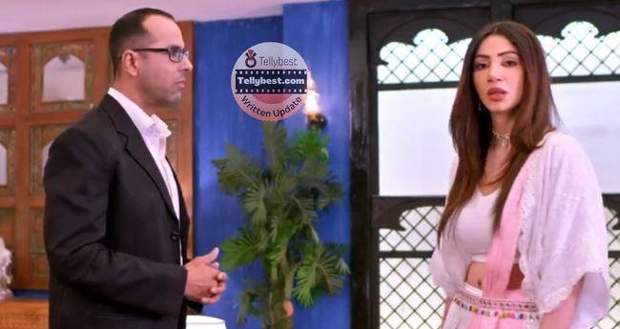 Today's Kumkum Bhagya 10th January 2023 episode starts with Rhea getting suspicious after hearing Alia’s words that she will not be able to meet Prachi forever.

Alia’s men inform her that Ranbir and Prachi have headed toward the construction zone and will enter the room soon.

Alia asks her men to make sure that Ranbir and Prachi come under the falling walls after the rope snaps at the correct time.

The men assure Alia that the rope will go off at the correct time as they have the set up in such a manner.

Ranbir and Prachi get an eerie feeling about coming to such a place and wonder where Alia’s cabin is in the middle of such chaos.

Prachi tells Ranbir that she is getting a weird feeling that is not helping her to calm down.

Ranbir tells Prachi that they need to move the drum to go ahead and decides to do so as they have come so far.

As soon as Ranbir moves the drum, the rope snaps, and the walls start to waver violently.

Rhea reaches on time and retracts Ranbir and Prachi out of that room with the help of a tin acting as a support.

Prachi asks Rhea what she is doing there and why she saved them as she would have gotten injured seriously.

Rhea says that she could not leave Prachi alone as she is her sister and tells them that she will see them the next day at the court.

Later, Alia gets gravely offended as she learns that Rhea interfered with her plan and ruined it by saving Ranbir and Prachi.

Rhea warns Alia not to do anything else and decides to go to court herself the next day.

The next day, Alia tries to stop Rhea by threatening her but Rhea leaves without having a second thought.

At the court, Rhea confesses her every planning and wrong deed for her obsession with Ranbir.

Rhea tells the judge that she was the one who threatened Ranbir to marry her by using suicide as a tool after she took Prachi’s sign on the fake divorce papers.

However, Rhea tells everyone that she has realized her sins and tells Prachi that she wishes that no one gets a sister like herself.

Rhea announces that she wants to withdraw the case after which the case gets dismissed by the judge.

Prachi and Ranbir go after Rhea while the family members get shocked to see the changed avatar of Rhea.

After Prachi gets hold of Rhea while she was leaving, she thanks her for telling everything at the court.

Rhea tells Ranbir and Prachi to live happily with their angel as they deserve all the happiness in their upcoming future.

Prachi requests Rhea to return to the Kohli residence as her baby’s aunt, but Rhea refuses as she has no motherly qualities.

Rhea promises to come back to Prachi when she learns the love and care of a mother so that she can care for her sister’s child.

Rhea leaves with Prachi crying in Ranbir’s arms as she wants to give herself some private time.